The variation in input according to the output leads to produce more accurate system output. Thus controllability in the closed-loop system is achieved through the output generated by utilizing a feedback path.

Closed-loop systems are considered as fully automatic control system because it is designed in a way that the achieved output is automatically compared with the reference input to have the required output.

We have already discussed in our previous article about the control system. A control system is a system that is designed to produce a specified output by the action of required controlling.

Now the controlling provided to the system can be either output independent or output dependent. This variation leads to give two different categories of control system.

A system in which controlling action is independent of the generated system output is known as open-loop control system. While in a closed-loop system, the produced output controls the functioning of the system by the used of feedback.

Basically a closed-loop system was designed to overcome the disadvantages associated with an open-loop system. We know that open-loop systems do not hold the ability to automatically provide accurate output.

We all are aware of the fact that the basic requirement of using an electrical or electronic system is to generate the desired output. And in any system, if the measurement is not performed and the required output is not achieved then it becomes almost impossible to get the accurate system response.

So, to have the accurate system response the easiest way is to compare the applied input with the achieved output. This helps in determining the error which is present inside the system. Therefore, once the error is measured then it can be reduced to the lowest possible value in order to get the desired output.

Till now we have used the term feedback so many times. But one must clearly know what feedback really means?

So basically feedback acts as the characteristic of the system that allows comparison between achieved output and reference input of a system.

Thus feedback loop is considered as the key parameter of a closed-loop control system.

Feedback in any circuit can be generally of 2 types: 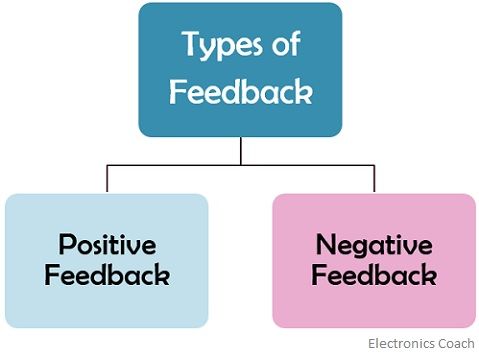 1. Positive Feedback: The type of feedback in a control system in which the input signal and the feedback signal are in phase with each other is known as a positive feedback system.

In these systems, the reference input gets added with the feedback signal thereby increasing the gain of the overall system.

2. Negative Feedback: In the case of negative feedback, the input signal and the feedback signal show out-of-phase relationship wrt each other.

Thus the applied input signal and the feedback signal are subtracted to get the error signal. This leads to a reduction in the overall gain of the system.

Thus we can say it is the factor that is most importantly responsible to have the desired response of a system.

Operation of a Closed Loop System

Here as we can see that command input is fed to a transducer.

This is so because it is not always necessary that the available input is acceptable by the controller. Thus in such cases, the input cannot be directly applied to the system. As it must be changed from one form to another so that it can perform the role of reference input for the system.

This is the reason input is initially applied to the transducer so that it can be changed to a form acceptable by the system according to the nature of controller and process.

This leads to the generation of a specific output. But it is necessary to measure the generated output in order to find whether it is the desired output or not. So, for this, a part of the achieved output is given back to the input. This signal acts as a feedback signal.

This feedback signal, when compared with reference input, generates an error signal. This error signal is further provided to the controller that produces a manipulated signal (proportional to error signal) which is nothing but a control signal that guides the process to eliminate the error thereby producing the desired output.

The achieved output is known as the controlled output of the system and holds accuracy.

Transfer function indicates the behaviour of the system as it is defined as the mathematical relation between the input and output of the system.

The gain of the system defines the ratio of output to input. Thus we can say the output of the system is the product of transfer function and input.

Consider the closed-loop system given below:

So, for the above-given system,

On substituting the value of E(s) in the 1st equation

This is the transfer function of a closed-loop system with negative feedback.

For a positive feedback system, it is given as:

For a unity feedback system (i.,e H(s) = 0) with a high value of gain. The transfer function is unity.