Another major difference between LED and OLED is that a wider viewing angle is noticed in the case of OLED. At the same time, black level is more dominant in OLED as compared to LED.

We will discuss some more important differences between LED and OLED by making use of a comparison chart but before proceeding towards that have a look at the contents to be discussed under this article.

LED stands for Light Emitting Diode, in which recombination of electron-hole pair generates heat in the form of light energy. It works on the principle of electroluminescence.

This emitted light is responsible for the production of an image on the screen of the LED display.

The figure below shows you the layered structure of LED: 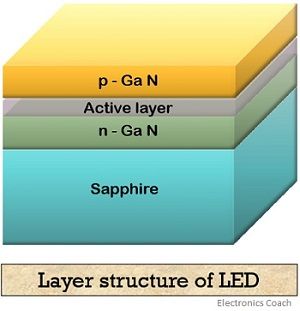 We are aware of the fact that LED is composed of inorganic semiconductor materials, thus recombination of electron and hole emits energy, this heat energy in LED is made to be released in the form of light particles.

Hence, causing it to generate light energy. In LED display the backlight used as the source of light is usually a Light-emitting diode.

Let’s now understand how this happens:

LED is basically a p-n junction diode that operates on a forward biased condition. As repulsive force on the electrons and holes by the battery terminals, causes them to drift across the junction. Electrons present at the conduction band (higher energy level) tries to recombine with the hole present in the valence band (lower energy level).

During their movement from higher energy level to lower one, electrons give off energy. This energy is usually in the form of heat but some semiconductor materials release energy in the form of light.

Usually, semiconductors such as GaAsP and GaP are used in the construction LED TVs. As these have an excellent property of generating energy in the form of photons.

OLED is an abbreviation for Organic Light Emitting Diode. It is composed of organic semiconductor material thus termed as OLED. Here, thin layers of organic material are placed between two conducting elements. This arrangement gives off bright light on the application of current.

The figure below shows the basic arrangement of an OLED: 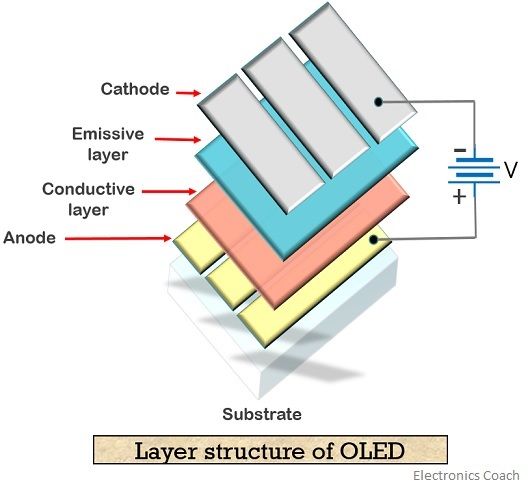 Let us now understand how it works:

An external potential is applied between the cathode and anode terminal. Due to which flow of current is observed from cathode to anode terminal but this flows through the 2 thin films which are named as the conductive and emissive layer between them.

As we can see in the figure above, the negative potential of the battery provides a negative charge to the cathode, thus the emissive layer due to negatively charged particle acts as an n-type material.

In a similar way due to the positive potential, anode supplies positive charges to the conductive layer, thus the layer acts as a p-type material.

The process continues until the flow of current is maintained in the device.

It is not wrong to say that OLEDs are so small and hence can be utilized as separate pixels to form display of any screen, their individuality causes them to be on and off independently.

Key Differences Between LED and OLED

OLED is an advancement of LED in which OLED is composed of organic semiconductor material. The working principle of the two is almost the same however various parameters differentiate them.