Synchronous Motors are the ones that are designed to operate or rotate at synchronous speed. Through Synchronous Motor Drives the various processes like starting, pull in, or braking of the synchronous motor becomes easy thereby allowing smooth operations.

There are two types of windings that exist on the synchronous motor. One is the three-phase armature winding present on the stator while another is field winding present on the rotor. The field winding of the synchronous motor is provided with dc supply due to which its own mmf will get generated and this mmf is known as field mmf. On the other hand, in the three-phase stator winding rotating armature mmf is produced as the stator winding carries a three-phase balanced current.

The resultant mmf of the system is the combination of two individual mmfs. When field mmf and resultant mmf interact with each other then electromagnetic torque is generated.

Synchronous motors employed with variable frequency drives find considerable applications in industries similar to induction motors and dc motors. Along with that, these are also used in the fields where there is a need for high dynamic performance like in rolling mills. Also, synchronous motor drives are used in extruders, pumps, compressors, propulsion systems, etc.

In high power medium-voltage drives two types of synchronous motors are generally used and these are as follows:

These two are different in a way that in WRSM, the current in the rotor field winding gives rise to rotor magnetic flux. But in the case of PMSM, the rotor flux is the result of the presence of a permanent magnet thus, it is called so.

The synchronous motor can be of the salient-pole type or cylindrical type and this classification depends on the shape of the rotor and the air gap distribution along the perimeter of the rotor.

The structural representation of a 6-pole WRSM is shown below: 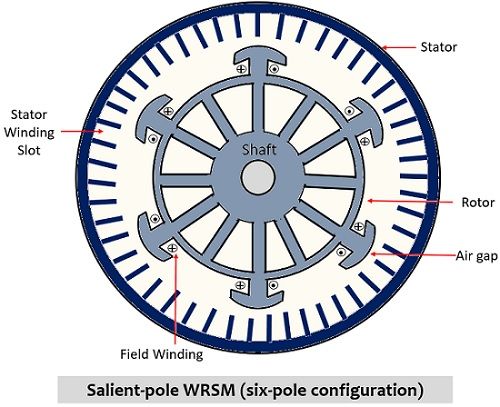 The field winding of the rotor is provided direct current excitation and this can be done directly through brushes in contact with the slip rings which are connected to the shaft where the slip rings form an electrical connection with the rotor. While in some cases, a brushless exciter is used to provide direct excitation and this exciter forms a connection with the shaft. In this case, there exists a diode rectifier on the shaft and the alternating current produced by the exciter is changed into dc for the operation of the rotor by the diode rectifier.

Out of the two discussed methods, the former one is quite simpler than the latter. However, the use of brushes and slip rings gives rise to regular maintenance requirements. While the brushless technique is complex and expensive but requires less maintenance.

The structural representation of eight-pole PMSM is shown below: 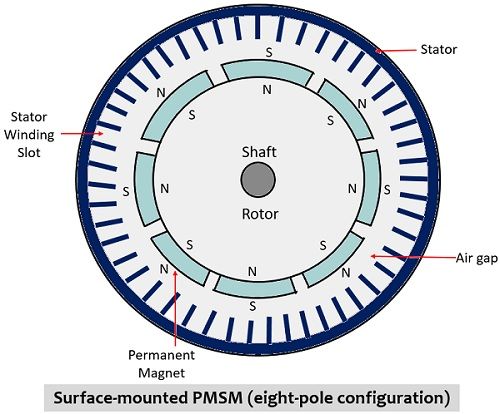 In the case of PMSM, permanent magnets are used in order to generate the magnetic flux of the rotor, and due to this reason, these are of brushless orientation. Here in this case the efficiency of the motor is quite high and this is so because the losses associated with rotor winding do not exist here. However, due to the presence of permanent magnets there exists high chances of demagnetization and is comparatively costly than WRSM.

PMSM is further classified into two categories and this classification is based on the mounting orientation of permanent magnets on the rotor. So, on this basis, we can have surface mounted PMSM and Inset PMSM.

In the surface-mounted type, the permanent magnets are placed on the surface of the rotor in an even manner. In this case, the pieces of the magnets are separated by non-iron materials over the surface of the rotor core. This is given the name cylindrical or non-salient-pole PMSM. This is regarded as a simple technique but at high rotational speeds, there are chances that the magnets will get detached from the rotor due to centrifugal forces. Thus, this is generally suitable for low-speed applications such as rotor speed of around a few thousand rpm.

In the case of inset PMSM, the rotor has permanent magnets. The rotor core material and the magnet have different permeabilities and this gives rise to saliency. These motors are designed to operate at high rotational speed as in this configuration the rotational stress of the magnets associated with the centrifugal forces is comparatively smaller than surface-mounted PMSM. Thus, the high rotor speed is obtained in this case.

We have already discussed in the beginning that synchronous motor drives facilitate ease in starting, pull in, and braking processes. So, let us proceed to discuss each parameter individually.

The synchronous motors do not exhibit the self-starting ability and its stator is excited similar to that of the induction motor. However, rotors are excited in different manner as dc supply is provided to them. When the stator is provided a three-phase AC supply then this gives rise to rotating magnetic flux, which permits the rotation at synchronous speed. When DC supply is provided to the rotor then due to generated magnetic flux, the rotation of the magnetic field will occur at synchronous speed, and in this case, the rotor behaves as a magnet with two salient poles.

When the rotor is stationary then it will not follow the synchronous rotation of the magnetic field. At this condition due to the rapid movement of the two poles, the rotor will get fixed at its position and so it is said that synchronous motors are not self-starting.

Pull in of Synchronous Motor

Now, the question arises, how pull-in of the synchronous motor takes place. So basically, when the rotor of the motor reaches around the synchronous speed then DC supply is provided. Due to the provided supply, variations in phase angle and torque angle will be noticed in the motor. Once pull-in has been completed then synchronous speed will be attained by the rotor.

In general, braking is classified into three categories namely,

The dynamic braking is applied in a way that the motor is disconnected from the supply and a connection with a three-phase resistor is formed. Here, in this case, the motor performs synchronous generation and the resistors are responsible for the energy dissipation.