Definition of Half Wave Rectifier 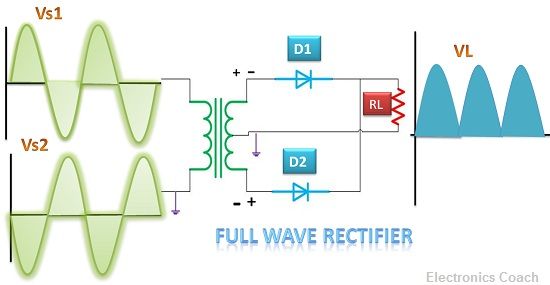 The P-terminal of diode D1 is connected to the positive voltage which makes the diode to operate in forward biased region. At the same time diode D2 becomes reverse biased, due to the negative voltage at the bottom of the secondary winding.

Now, diode D2 will be forward biased, and diode D1 will be reverse biased. Thus, DC voltage will be obtained for positive half of AC cycle as well as for negative half of AC cycle. Thus, it is called full wave as it conducts for the full cycle of AC.

Key Differences Between Half Wave and Full Wave Rectifier

Our selection for half wave and full wave rectifier should be based upon the requirements. If we require a low-cost device and if you can compromise with efficiency then use half wave. But if you are working on some specific circuit designing which requires highly efficient conversion of AC to DC then use full wave, keeping in mind its circuit complexity and high cost.