Definition: A technique by which analog signal gets converted into digital form in order to have signal transmission through a digital network is known as Pulse Code Modulation. It is abbreviated as PCM.

The major steps involved in PCM is sampling, quantizing and encoding which will be discussed in detail in the upcoming sections.

In pulse code modulation, the analog message signal is first sampled, and then the amplitude of the sample is approximated to the nearest set of quantization level. This allows the representation of time and amplitude in a discrete manner. Thereby, generating a discrete signal.

This discrete signal is then converted into its binary form for the transmission of the signal.

It is to be noted here that, in PCM technique the signal gets transmitted in the coded format and must be decoded at the receiver in order to have the original message signal.

The figure below shows the block diagram representing a PCM system 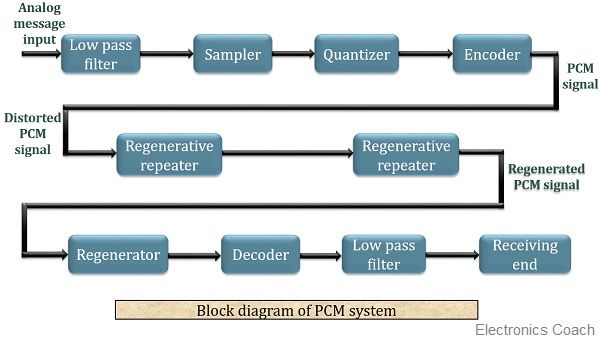 Lastly, the receiver section that performs decoding of the coded signal after regeneration of the signal at the receiver. Let us now understand the working of each section in detail:

The detailed diagram of a practical PCM transmitter is shown below

The output of the sampler is a signal that is discrete time continuous amplitude signal denoted as nTs which is nothing but a PAM signal.

As it basically rounds off the value to a certain level this shows some variation by the actual amount. Thus we can say, quantizing a signal introduces some distortion or noise into it. This is known as quantization error.

This noise factor is somewhat better than the channel noise as it is controllable. 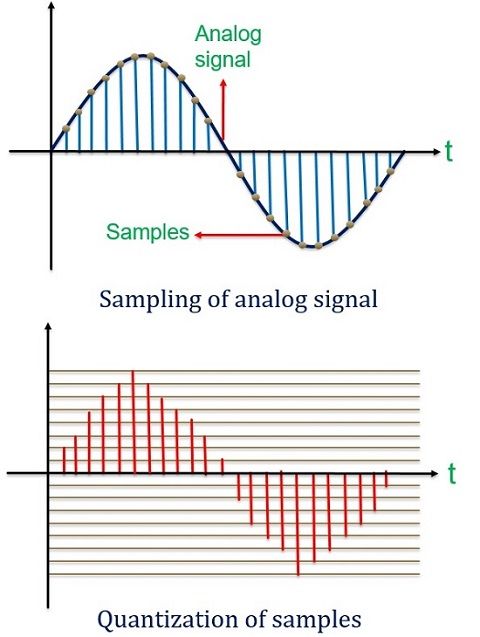 As it is a binary encoder thus generates a binary coded sequence. That is transmitted through the transmission path.

Transmission path in a PCM system

The channel introduces distortion in the signal during transmission. This distortion is eliminated by the regenerator in order to provide a distortionless PCM signal. Resultantly, enhancing the transmission ability of the system.

The figure below shows the block diagram of a regenerative repeater. It basically performs equalization and timing and then executes decision making.

The PCM signal when provided to the regenerative repeater, the equalizer circuit at the beginning performs the reshaping of the distorted signal. At the same time, the timing circuit generates a pulse train that is a derivative of input PCM pulses. 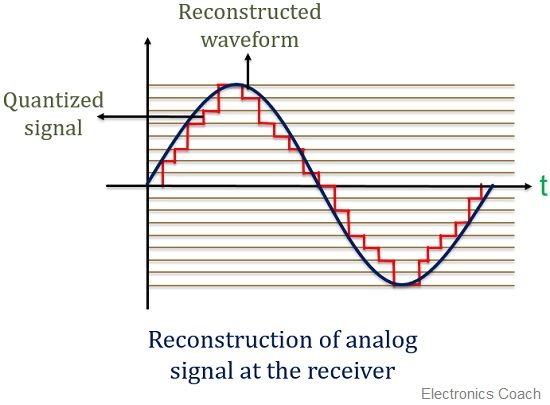 : q is the digital level of the quantizer

Every sample is changed into n bits, thus, a number of bit per sample is ‘n’.

As transmission bandwidth is half the signalling rate, hence

As we have already discussed, r = nfs

Thus the bandwidth of the PCM system is given as,

Thus from the above discussion, we can conclude that a PCM system, transmits data in a coded format, that ensures secured transmission. But, this at the same time needs decoding system in order to reproduce exact message signal that increases system complexity.