The significant difference between LED and LASER lies in the working principle. LED emits light as the consequence of charge carriers recombination across P-N Junction, while LASER emits light as a result of photons striking the atom and compels them to release the similar photon.  A laser works on the principle of stimulated emission and LED works on the principle of Electro-luminance.

Thus, in LASER every released photon strike another atom to release similar photon and therefore, the beam of light thus produced is coherent in nature. On the contrary, the light produced by LED is incoherent. Thus, light emitted by LED consists of many colours while light beam generated by the LASER is monochromatic i.e. single colour light.

LED is the acronym of Light Emitting Diode while the LASER is the abbreviated term used for Light Amplification by Stimulated Emission of Radiation.

The LED is considered as the optical source for various crucial applications. The main principle behind its working is electro-luminance. In this phenomenon, the forward biased P-N junction emits light when electrons and holes recombine at the junction. 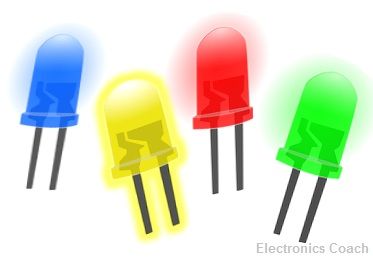 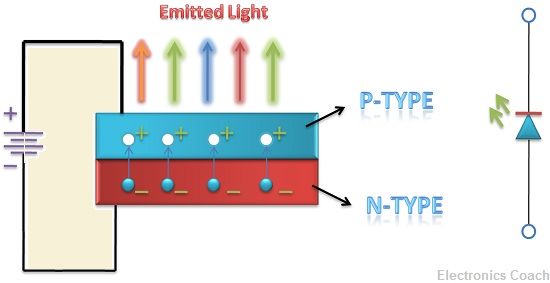 LED are significant over various optoelectronic devices because it possesses fast response time in order of 0.1 microseconds. The light emitted by LED consists of various radiations of narrow wavelength. It comprises of visible radiations.

If the power to light conversion efficiency of LED is compared with that of a tungsten lamp, it will be 10 to 50 times higher than that of it which clearly makes it an appropriate optoelectronic device.

If electrical energy is supplied to the electron at the lower energy level, it will jump from valence band to conduction band absorbing the additional energy supplied to it. This process is called Absorption.

When the electron is at higher energy level it is unstable, in order to become stable it releases some part of its energy. This energy can be in the form of heat or light. If the energy released is in the form of light then it will emit a photon. This is process is called spontaneous emission.

When the photon strikes the atom it will strike the electrons at higher energy state then as result of collision these electrons will become unstable due to high energy and energy imparted by the striking photon. Thus, this electron will move to lower energy state and release a photon in addition with the incident photon. This is called stimulated emission.

Key Differences Between LED and LASER

LED and LASER, both are the optoelectronic device, both the device generated light. But the working principle of light generation and construction architecture creates the difference. The output power generation capacity of laser diode lies in the range of 20 to 100 mW.

The protection of Eyes should be taken care when dealing with these optoelectronic devices especially in case of the LASER. It generates high energy beam.