Number systems can be classified into its sub-types on the basis of base of that system. Base of a number systems plays crucial role in understanding the number system and to convert it from one sub-type to other sub-type. Base is also sometimes referred as radix; both these terms have same meaning.

The classification of numbers systems on the basis of base can be understood from the below diagram. 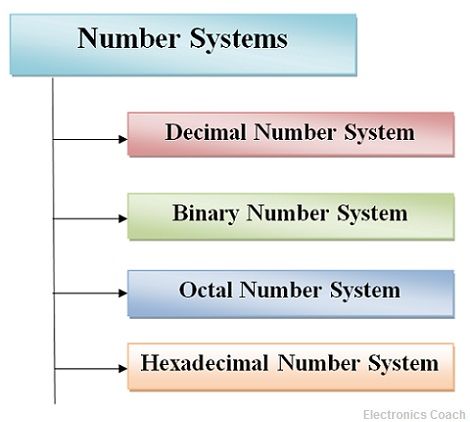 Thus, we have four major types of number systems that are binary, decimal, octal and hexadecimal. To understand it we should know the base of the particular number system. 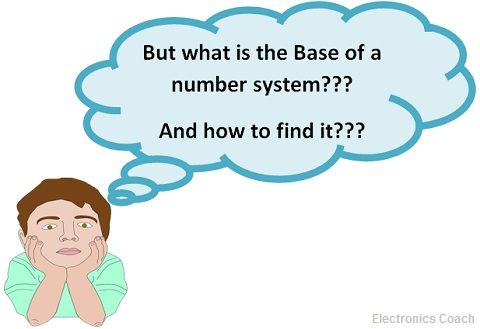 In order to find the value of digit in a particular number systems we need to have three basic components. They are as follows:

Now, let’s discuss each of the sub-type of number systems briefly.

Decimal Number System comprises of 10 digits. These digits are 0, 1, 2, 3, 4, 5, 6, 7, 8 & 9. The base of the decimal number system is 10 because total 10 digits are available in the number system. It does not implies that only 10 digits can be expressed in decimal numbers system but using these 10 digits we can define any number in this system no matter how large it is.

Expansion of Decimal Number: Consider the above number again i.e. 7896.

Now, it can be written as:-

To write a number in terms of base 10, we can use the positional value as superscript of base 10.

Decimal equivalent of Binary can be calculated by multiplying the binary digits with 2 to the power of positional values of respective digits.

Let’s consider an octal number 431, now its decimal equivalent can be described as:-

Decimal Equivalent of Hexadecimal Numbers: Let’s consider a hexadecimal number 5B52, now its decimal equivalent can be calculated by multiplying each digit with 16 and 16 will be raised to the power of positional value of the respective digit.

Number Systems is crucial for understanding the processing of digital system. Digital system takes binary, octal & hexadecimal number as input and process it and generates output. Thus, in the field of information technology or embedded system everywhere one need to be well aware of number system in order to understand its operation.