In open-loop systems, the output is neither measured nor fed back to the input for further consideration.

In our previous article, we have discussed about control system.

We know that a control system directs the operation of a system in order to carry out a specified objective.

Everything around us that provides an output requires proper controlling. Like from a fan, TV, refrigerator to satellites etc. everything needs controlling, thus are control systems.

The figure here represents the block diagram of an open-loop control system:

Here as we can see that the system consists of two blocks, one is the controller while other is controlled process.

But as there is no feedback path present in the system, thus whether the achieved output is desired or not the input has nothing to do with it.

So, this is the reason we say that in an open-loop system the input is independent of the output.

It is noteworthy here that this generally produces an error in the system because there exist no chances to adjust the input when the output shows variation from the expected value.

We all are aware of the operation of a traffic light controller present at various road crossings.

Here the system has nothing to do with the generated output as it is not changing its input according to the traffic present on any particular side or any other factor. Simply after a definite time interval, according to the initially provided input, the system is generating the output.

Basically relays are used to provide timing sequence to the system.

So, this clearly indicates that whatever output is achieved, the input will remain independent of it.

We know transfer function is given as:

When we separately consider the transfer function of each block then it will be given as: 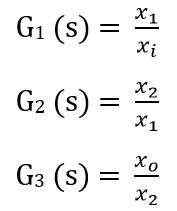 Thus the overall transfer function will be:

So, the open-loop gain will be:

The use of the open-loop control system indicates that the operator of the system is ready to consider some minimal deviation in the output from the expected value.

Open-loop systems widely find their applications in the following domains:

So, we can conclude that the open-loop system never uses a feedback loop in the circuit as it has nothing to do with the output for further reference input.