The rectifier circuit consists of a step-down transformer, and two diodes are connected, and they are centre tapped. Thus, this type of rectifier where centre tapping is provided is called centre tap rectifier.

The load resistor is connected, and the output voltage is obtained across this resistor. 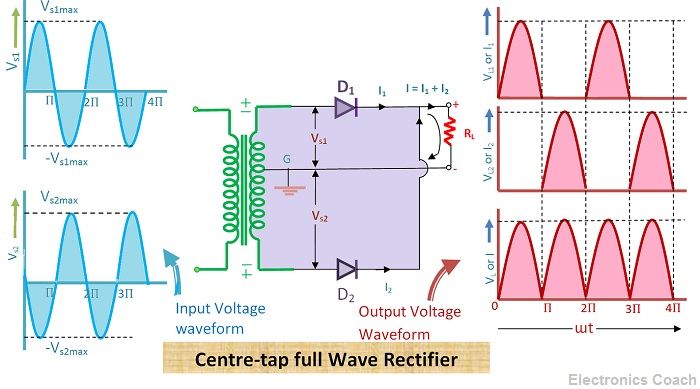 The input AC voltage supplied to rectify is extremely high. The AC signal is supplied by transmission lines at high voltages because it is economical to supply AC at high voltage. The step-down transformer in rectifier circuit converts high voltage AC into low voltage AC.

Thus, the diode D1 is reversed biased, and diode D2 is forward biased. This happens because the negative voltage on top of the secondary winding makes the anode terminal negative with respect to the cathode in diode D1.

Let’s assume the forward resistance be Rf ohms and reverse resistance equal to infinity, then the current flowing through the load resistor can be given as:-

The total current i can be obtained by the sum of i1 and i2 for the whole cycle.

Where Rf is the forward resistance and RL is the load resistor.

The other factors such as output current and output voltage are described below.

6. Rectification Efficiency: The rectification efficiency of full wave rectifier can be obtained by the ratio of dc power delivered to load and ac power present in the output power. 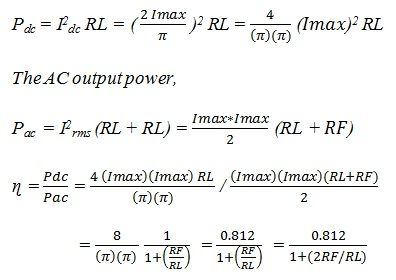