Definition: A type of servomotor that uses DC electrical input to generate mechanical output like velocity, acceleration or position is known as DC servomotor. It is somewhat similar to a normal DC motor. However, there exist some differences between a normal dc motor and dc servomotor.

Basically, DC servomotors of all types are required to be excited individually. This leads to provide linear characteristics between torque and speed.

We have already discussed in our previous article that servomotors are the devices that are used to change electrical input into positional mechanical output. A normal dc motor that utilizes the principle of servomechanism simply converted into a dc servomotor.

More simply, we can say that a DC motor controlled with servomechanism is known as DC servomotor.

It is known to us that the type of input applied to the servomotor leads to its classification as AC servomotor and DC servomotor.

Here in this article, we will discuss each type separately.

While the armature current is maintained at a constant value using a constant current source.

The figure given below represents the field controlled DC servomotor:

It is to be noted here that the field in this type of dc servomotor can be either electromagnetic type where a salient pole is present with a field winding wound around it and excitation to it is provided with dc current or a permanent magnet type.

We have already discussed the amplified error signal from the servoamplifier excites the field. And in this way, the excitation provided controls the torque i.e., the rotation of the motor.

In case the value of the current source applied at the armature is quite large, then for a small change in field current, there will be a proportional change in the torque of the motor.

It is to be noted here that the direction in which the shaft rotates can be changed according to the polarity of the field or the by using split field dc motor.

When the direction of rotation is polarity dependent then this signifies that with the change in polarity of the field, the rotational direction also changes.

However, sometimes by the use of split field dc motor, the rotational direction of the motor changes. This is so because as the name suggests in this type of motor, the winding is split into two parts, where one part is wounded in a clockwise direction while the other in an anticlockwise direction.

Here, the ratio of reactance to resistance is quite large thereby exhibiting the high value of the time constant. This implies that for quick changes in the control signals the response will be slower. Thus, is majorly used in small rated motors.

However, here the power requirement is less as the motor is controlled by the field.

The voltage from the servoamplifier, Va(t) with resistance Ra and inductance La is provided at the armature. And this input voltage at the armature controls the shaft.

The figure below represents the arrangement of armature coupled dc servomotor:

Here the constant field is provided using the permanent magnets and hence no field coils are required.

The figure below shows the torque-speed characteristics of armature controlled dc servomotor: 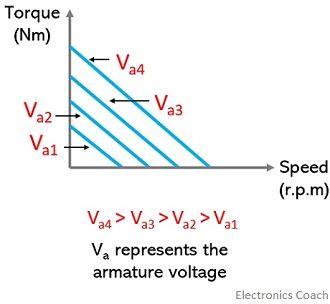