Servomotors are electrical devices used for converting electrical signal provided as input into a precise angular velocity. It is known as a servo system. Basically, a servo system is the one that generates some form of mechanical variable like velocity, acceleration or position as its output.

A servomotor is designed to generate the mechanical equivalent of the applied electrical signal.

It is known to be a low power motor that finds applications in servomechanisms or position control systems. In servomotor, the applied electric input allows the rotation of the motor at a certain angle. Also, it does so by great precision, this means rotation at a specified angle can be accurately achieved.

Servomechanism is the term associated with positioning systems. It is a mechanism which is only applied to the systems where the feedback and error correction signals control the mechanical position or its derivatives like velocity and acceleration.

Servomotor uses servomechanism to convert the applied electrical energy into precisely controlled motion by making use of negative feedback.

We have already discussed that servo systems are used in position control systems. Thus are referred as the automatic control system that uses error signals for their operation. The amplified form of these signals is used to drive the motors.

In the case of servomotors, position feedback is used to control its motion and final position.

It is known to be a simple electric motor which is controlled by servomechanism.

A servomotor has 4 major components on which its working is dependent. These are as follows:

It operates in a way that initially; the motor is excited by externally supplying power to it. It is to be noted here that the speed of the motor depends on the applied voltage to it.

This means that to control the motor speed, the voltage must be adjusted accordingly.

In servomotor, the potentiometer is generally used as the position sensing and controlling device. Basically, according to the supplied input voltage, the device rotates and attains a specific position.

In this way, the desired position of the motor is achieved with high precision using feedback potentiometer.

The major classification of the servomotor is done on the basis of the type of supply applied to it for its operation.

This is so because the positioning of the motor is controlled with the input electrical signal which is either analog or digital in nature.

Thus, it is classified as: 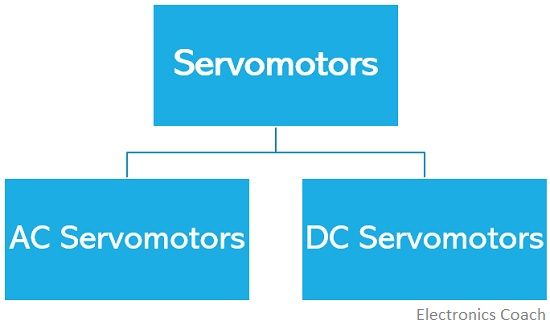 AC Servomotor: The type of servomotor that uses AC electrical input for providing a mechanical positional output is known as AC servomotor.

DC Servomotor: When the applied input to the motor is DC in nature then that configuration of the servomotor is known as DC servomotor.

The major requirements of the servomotor are as follows:

This is all about servomotors and its applications.