Definition: Modulation, the process in which the carrier signal is varied according to the information bearing signal also called the modulating signal.

During modulation, some characteristics it can be amplitude, frequency, or phase is varied in accordance with the original information-bearing signal that has to be transmitted.

The receiver at the destination end won’t be able to understand that particular modulated signal so it uses demodulator section and demodulates that signal so as to get original baseband signal.

Now the thing that comes to our mind is what a baseband signal is?

The baseband signal is nothing but the original message signal that the user actually wants to transmit which is unconverted or we can say unmodulated. These unmodulated signal generally occupies frequency spectrum from 0Hz as we can see in the picture given below- 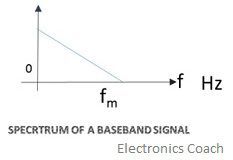 Let’s take an example and make it more clear, an audio signal can have a baseband range from 20Hz to 20KHz but during transmission when the signal gets modulated it goes to a higher inaudible range.

When any baseband signal is transmitted such as in telephone network where the electrical form of sound signal is directly placed on telephone lines for transmission it leads to several difficulties in communication that can be the effect of noise or crosstalk.

This is the only reason why we convert a baseband signal into a bandpass signal.

Another question that arises in our mind is what a bandpass signal is?

When the baseband signal is modulated or converted so as to transmit it to a longer distance it is known as bandpass signal. These signal have non zero lowest frequency in its spectrum. The frequency band of these signal is not adjacent to zero frequency.

Radio waves and ultrasound waves best suit the example for bandpass signal. During modulation, the carrier signal which we use is basically a carrier which carries modulating signal from end to the other. 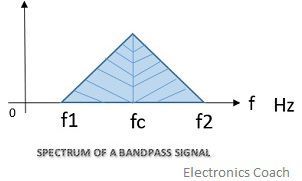 For example, when a person rides his/her bicycle, the person can be assumed as the signal to be modulated and bicycle can be viewed as the carrier signal.

In Digital communication, error detection and correction can be implemented easily. Digital modulation provides much more efficient results when compared to analog communication.