The crucial thing which differentiates Centre Tapped and Bridge Rectifier is the design architecture. Centre tapped Rectifier consists of two diodes which are connected to the centre tapped secondary winding of the transformer as well as with the load resistor. Bridge rectifier comprises of 4 diodes which are connected in the form of Wheat stone bridge and thus provide full wave rectification.

The advantage of using Bridge rectifier is that no centre tapping is required. Thus, we can eliminate the transformer from the circuit, if the step-down voltage is not required. Although, Bridge rectifier also possesses some drawbacks, among which one of the drawbacks is the voltage drop across four diodes.

The other significant differences can be understood with the help of comparison chart described below.

In this, the anodes of the diodes are connected with Centre tapped secondary winding, and the cathodes of the diodes are connected with the load resistor. Thus, it is called Centre Tapped Rectifier. It is a type of full wave rectifier. Firstly it converts one half of the AC cycle into DC voltage and then it converts another half of AC cycle into DC voltage. 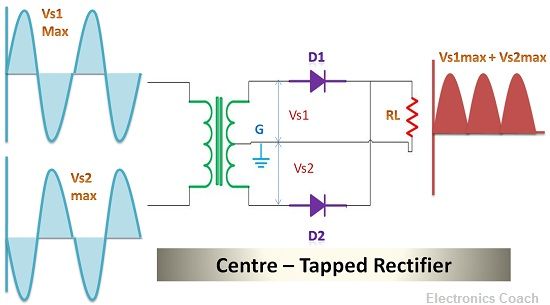 In this way, the complete cycle of AC is converted into DC voltage, and the output is obtained across the load resistor. This will be the pulsating DC voltage as it also consists of AC ripples.

Bridge Rectifier also converts complete cycle of AC into pulsating DC, but its conversion manner is different from Centre Tapped Rectifier. All the four diodes are connected in the form of Wheatstone bridge. When AC voltage is applied to the bridge rectifier, the step-down transformer will convert it into low voltage DC voltage as it is easy to process low voltage as compared to high voltage.

In this manner, bridge rectifier converts complete half cycle of AC into pulsating DC.

Centre Tapped and Bridge Rectifier are the types of Full wave rectifier. Both provide full wave rectification, but their working process is different. Bridge rectifier has certain advantages over centre tap rectifier. It possesses better transformer utilization factor, better voltage regulation etc. But it also has a drawback of more voltage drop as compared to centre tap as it has four diodes.