On the contrary, a rectifier is a device which is used for the conversion of AC signal into DC signal.

The other crucial difference between diode and rectifier is that both are used for different application. When we want a switch we will use a diode. On the other hand when we need to convert AC into DC then we will use a rectifier.

You all are aware of the utility of a switch. But you may or may not know the use of rectifier in our daily routine. Now you all must be thinking what is that? Let me tell you the most indispensable part of our day to day life i.e. our mobile phones; it needs a rectifier for charging. The charger of our mobile phones comprises a rectifier circuit.

The AC supplied to the rectifier is converted into pulsating DC and that is used for the charging of our mobile phones. We will discuss some more differences between diode and rectifier with the help of comparison chart but before that, let’s put light on the roadmap of this article.

A stage is reached when no more charge carriers flow towards another junction. This is  because they do not possess sufficient energy which is required to overcome the potential of the junction. In this condition, the diode will work only when it is supplied energy from any external source such as a battery, cell etc. 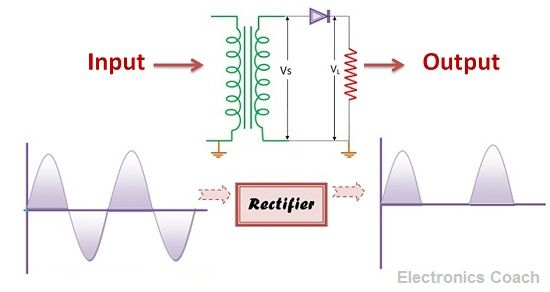 The AC applied to the rectifier for conversion is high voltage AC, because AC voltage is always supplied in high magnitude. It is economical to transmit it in high voltage range. But it is not possible for a rectifier to process such a high magnitude AC, thus a  step-down transformer is connected at the input side. It lowers the magnitude of applied AC voltage.

Key Differences between Diode and Rectifier

The diode and rectifier, both are semiconductor device but are used in different application due to their different functioning.