The main difference LED and LCD is that the LED works on the principle of electroluminescence i.e. it generates light due to recombination of electron and holes while LCD do not generate light of its own but control the light energy and modify it in such a way that some area of the display screen appears bright while some areas appear dark.

Although, LED and LCD both are the types of the display device but the brightness level of LED is more than that of LCD. The power requirement is also one of the main factors which differentiate LED and LCD. As LCD do not generate light on its own, thus the power is required only for modifying the existing light so the power required will be very low in magnitude. But the LED needs power for generation of light thus power requirement in case of LED is more.

The LCD can be fabricated or designed in any particular size according to the specific application. While this is not the case with LED. We will discuss some more significant differences between LED and LCD with the help of comparison chart. But before starting with comparison chart, let’s have a look at the roadmap of this article.

The LED is an acronym of Light Emitting Diode; it generates light when electrons in conduction band recombine with holes in the valence band. The LEDs are made up of semiconductors such as GaAsP and GaP, the semiconductor material such as silicon and germanium are not used in the construction of LED. 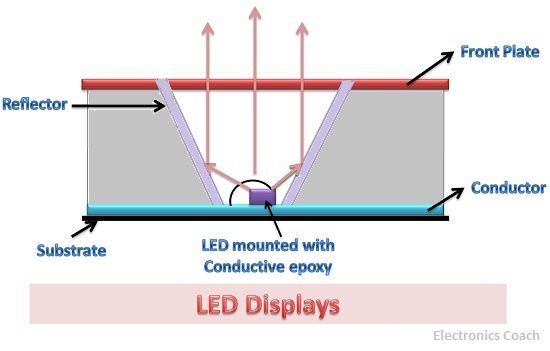 Thus, LED converts the electrical energy into light energy. The conversion efficiency of LEDs is much higher than that of the tungsten lamp. The LEDs are used for display devices but the power requirement is quite large. For displaying a single digit the LED require 10-250 mW of power. The brightness level of LED display is very high thus, it provides a good quality display. 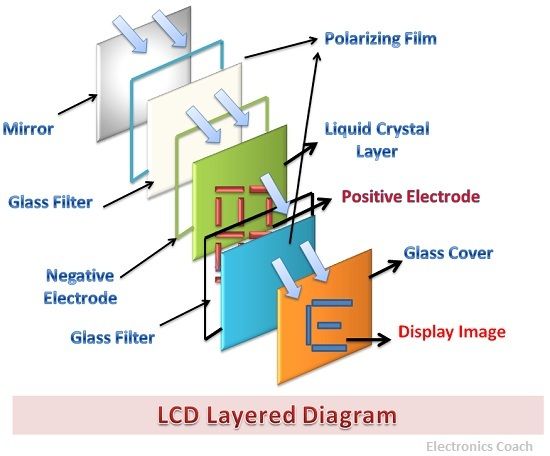 The liquid crystal is fed between the front polarizer and rear polarizer, when the voltage is not applied from the external electric field then the light ray rotate at the right angle and is reflected back to the external source. To prevent this polarizer are coated with conducting material and the electric field is applied to it.

The electric field of 1000 V/m2 is applied to the liquid crystals, for each 10 µm thick layer of the nematic crystal the applied electric field is 10 V.

Key Differences between LED and LCD

The LED and LCD, both are display device but the properties of both are quite different. The LEDs are more advanced and provide better quality as compared to that of LCDs. The larger viewing angle, higher brightness level, wide range of temperature and lower response time makes LED a good choice for display.