LED is an acronym for Light Emitting Diode. It is formed by a forward biased PN junction. When electrons in N-type semiconductor combine with holes in the P-type semiconductor, they release energy in the form of light or heat. 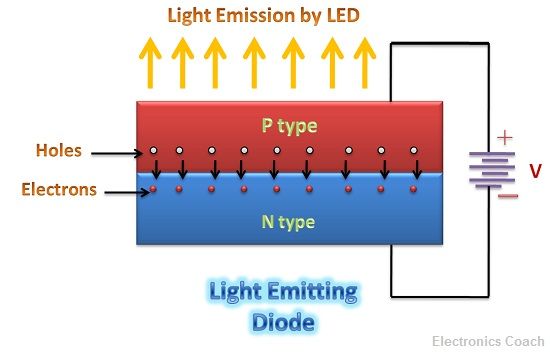 The electrons in conduction band possess higher energy than holes in the valence band. Thus, recombination is possible only when electron gives some part of the energy. This concept is called electro-luminance and LEDs are based on this.

One more crucial point in the construction of LEDs is the usage of the thin film of Gold. This is because the light if enter into the internal structure of LED will reflect to the top surface by this gold film. Thus, the intensity of light emitted will be high. 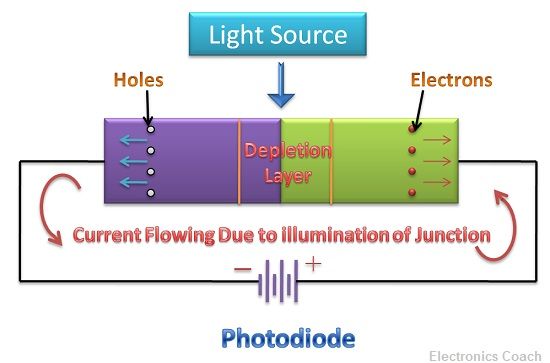 This process is termed as photoconduction as the process of conduction is possible only using Photons. Photodiode operates in reversed biased mode.

Based on this principle of photoconduction, phototransistors can also be made. Instead of using diode we can use a transistor, and electric current can be generated using photons.

Key Differences Between LED and Photodiode

LED and Photodiode, both are two terminal devices, but they differ in their working mechanism. They are completely different devices. One generates electricity and other generates current. The intensity of light produced by LED is directly proportional to the applied voltage. The higher the voltage, the higher will be the light intensity.

Similarly, the intensity of electric current generated by the photodiode is directly dependant on the intensity of light rays falls on it. But a term is associated with photodiodes, i.e. dark current, this is the current that flows in the reversed biased photodiode when no light is incident on it.