Piezo-electric transducers are based on the principle of the piezoelectric effect.

The voltage is given as:

As we have discussed that these transducers operate on the principle of the piezoelectric effect and here the word piezo means stress or force. The higher the force, higher will be the voltage at the output. The electric potential can be easily measured by voltage measuring devices.

This effect is reversible i.e. if a varying potential is given at a proper axis, it will automatically variate the dimensions of the crystal which leads to deformation of the crystal.

The elements that demonstrate piezo-electric qualities are called electro-resistive elements.

Quartz and Rochelle salt belongs to the natural group. The nature of ceramic materials is polycrystalline and made up of barium titanate. In originality, they do not have piezo-electric properties but proper polarizing treatment is used for the production of such properties.

In a nutshell, a piezo-electric transducer changes mechanical motion into electrical signals because mechanical motion generates charges and this charge appears as a voltage. This effect is direction sensitive.

The Piezo-electric crystal is shown below:

The thickness of the crystal changes on application of force

t = thickness of crystal in m

Young’s modulus is given by:

l = length of crystal in m

By substituting the value of “force” in the “charge equation”:

Now, due to this charge, we will have an output voltage

And it is given by

Substituting the value of in  we will get

But we know that

g is the voltage sensitivity and its unit is Vm/N

Sometimes it is better to express the output voltage in terms of deflection inspite of force. This is so because deformation is the real reason for charge generation.

Modes of operation of the piezo-electric crystal

The operational modes are as follows-

The modes are shown below: 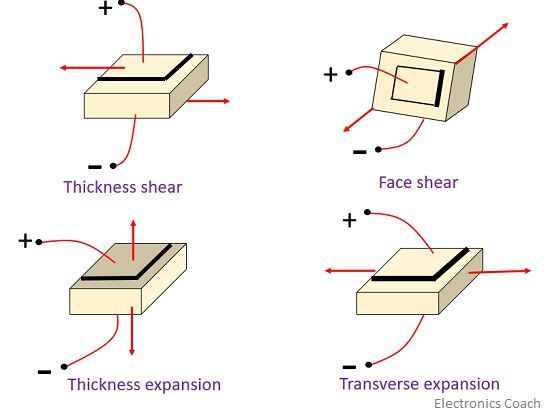 The basic circuit is shown below: 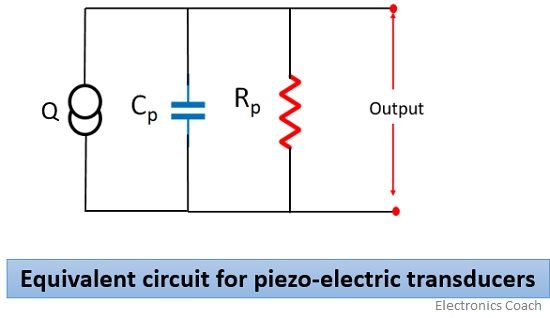 Charge generation is across Cp and Rp is the leakage resistance

It is required to have an external circuit associated with it as the output produced by the piezo-electric transducer is low.