Power Electronics is regarded as an important subfield of electrical and electronics engineering.

The pictorial representation given below provides an idea about the operation of a power electronics-based system:

The branch of electrical engineering is sub-classified into three categories namely:

It is known to us that electronics generally revolves around semiconductor devices and circuits and thus the arrival of various technologies has made electronics a crucial branch of engineering.

Now, coming to the power domain, so power is associated with the generation, transmission, distribution, and utilization of various forms of electric power in static as well as rotating machinery. While control deals with the response characteristics of the systems incorporating feedback mechanisms for continuous or sampled data.

Thus, as a whole power electronics is regarded as the field that is concerned with the use of electronics for the purpose of controlling and conversion of electric power. To achieve this, the designing of such systems is done by maintaining interaction between source and load by making use of small-signal electric control circuits and power semiconductor devices.

Power electronics is known to be a vast as well as complex subject that is advancing with technology and turning out cost-effective with the various inventions. Its operations are quite reliable and are expanding in various fields like industrial, commercial, residential, military, and aerospace applications.

Relation of Power Electronics with other Disciplines 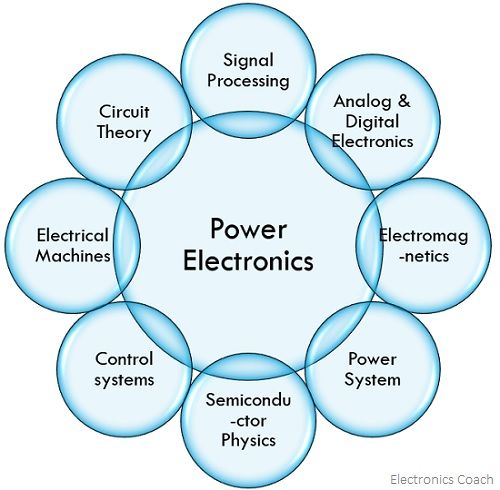 With the advent of various technological advancements in semiconductor physics, electronic devices and circuits along with control theory, the uses of power electronics in various fields have upgraded significantly.

The figure below represents the block diagram of a power electronics-based system: 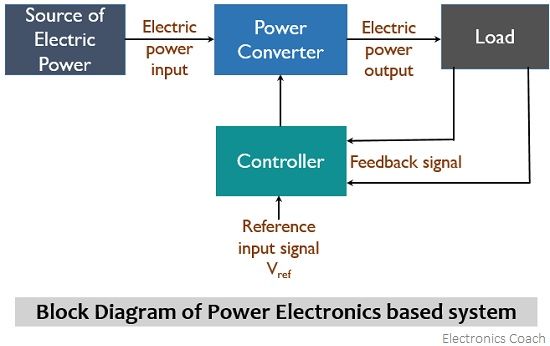 As it is clear from the above figure that here we are having a power electronics converter and controller along with some interfacing units. The power converters change one form of electric power into some other form with the use of a power semiconductor device. While power controllers are the ones that are responsible for producing control signals relative to turning on or off of the switching devices present within the circuit. The complete operation of the system will provide the desired signal of a particular frequency as shown in the block diagram given above.

In this way with proper control, the desired output is achieved at the load.

The pictorial representation given below shows the classification of power semiconductors devices in power control circuits:

The advantages are as follows:

The disadvantages are listed below:

You must note here that a crucial advent of power electronics in terms of usage came as its ability to save electricity of electrical apparatus. We know that today’s world is heading towards the consumption of energy for the benefit of humans in household chores and industrial needs. Generally, most of the energy is achieved by burning fossil fuels that resultantly causes global warming. Thus, the use of power electronics in electrical apparatus is helping in the reduction of electricity consumption and thereby increasing efficiency.

It is to be noted here that estimations show that around 15% of the consumption of electricity can be reduced by the use of power electronics.