The figure below represents the block diagram of the system with PI controller:

What are Proportional and Integral Controllers?

Proportional controllers are referred as the type of controllers in which the output signal shows proportionality with the error signal. It is given as

Integral controllers are the type of controllers where the output is proportional to the integral of the error signal. Thus is given as

However, the major advantage concerning the proportional controller is that these are designed in a way by which steady-state error gets reduced significantly thereby making the system more stable.

This is the reason the two are combinedly used to produce a type of controller which provides highly stable results.

Till now we have discussed what is proportional and integral controller individually. So, let us now understand how the two are combined.

So, in this, the control signal is formed by merging error and integral of the error signal.

Thus is given as:

We can write it as

In order to have the transfer function of the controller, we need to consider the Laplace transform of the above equation, so it is given as

Taking the common term i.e., E(s) out, we will get

It is to be noted here that the error signal will act as input that will cause variation in the output of the controller.

Thus on transposing E(s) to the LHS, we will get

On further simplification, we will get

Thus it can be written as:

This equation represents the gain of the PI controller.

So, the block diagram of a PI controller is given as:

To understand the effect of PI controller, consider the PI controller with unity negative feedback given below:

Suppose the gain of the controller is given as G1(s) whose value we have recently evaluated as:

And let the open-loop gain of the system be G2(s), given as

But the overall loop gain of the system will be

We know that the gain of the closed-loop system or overall controller is given as:

Since we have already considered the unity feedback system.

Thus the gain will be given as

On substituting the values we will get, 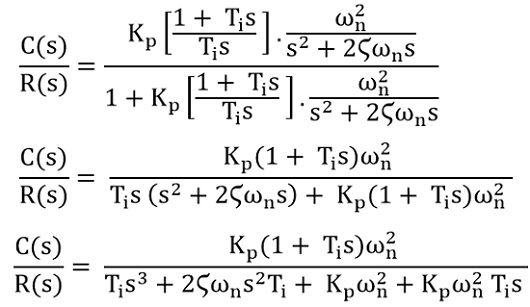 Taking Ti out from the denominator, we will get

The above equation clearly indicates that the power of ‘s’ is showing a significant increase in the transfer function. This implies the rise in the type number which resultantly causes a reduction in steady-state error.

When the PI controller is not present in the control system then there will be absence of ‘s’ in the numerator which will cause the absence of zeros in the transfer function.

So, we can say by introducing PI controllers in a control system, the steady-state error of the system gets extremely reduced without affecting the stability of the system.