Definition: Electric Drives are electromechanical systems designed to control the motion of electrical machines. It is considered an important component of various industrial processes equipment as it helps in easy optimization of motion controlling. It is regarded as a complicated control system that controls the rotation shaft of the motor.

A typical drive system has single or multiple electric motors along with a controlling system by which the rotation of the motor shaft is controlled. The major components that constitute the electric drives are electric motor, energy transmitting device, working (or driven) machine.

We know that motion controlling is quite prominent in various domestic and industrial applications. In order to generate the desired motion and maintain smooth controlling a specific system is incorporated which is given the name drives.

We have already discussed that the components of electric drives are an electric motor, energy transmitting device, and working machine. The power required for the desired motion to take place is supplied by the electric motor. While in order to deliver the supplied power to the driven machine for the operation to take place an energy transmitting device is used. The driven or working machine is responsible for the desired production process that is required to occur within the system.

Thus, we can say that an arrangement that contains an electric motor along with controlling and energy transmitting elements is regarded as an electric drive. Mainly electric drives provide a motion control mechanism as it converts electrical energy into mechanical energy so that motion can be imparted to different machines.

The figure given below shows the typical block diagram representation of an electric drive system: 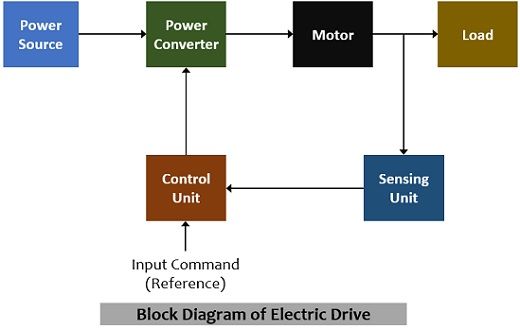 The crucial components that are incorporated here are the power source, power electronic converter, motor, load, control unit, and a sensing unit.

1. Power Source: This unit is responsible for providing the power which is needed by the system to do the desired operation.

2. Power Controller or Converter: Following are the functions that are performed by this unit:

3. Control Unit and Sensor Unit: This unit performs the action of controlling the power converter according to the provided input as well as the feedback signal obtained from the load under the closed-loop operation. Basically, the control unit works in conjunction with the sensor unit which actually senses the voltage or current signal as feedback to have the proper operating conditions. The sensing unit is responsible for sensing the current or speed of the motor. It protects as well as provides closed-loop operation.

Electric Drives has an enormous number of industrial as well as domestic applications including pumps, fans, motors, transportation systems, turbines, engines, etc. Not only this, it is useful in various electric tractions such as trains, buses, trolleys, and vehicles powered with solar energy. Some other applications are in Lathe machines, shears, frequency converters, air compressors, refrigeration, and air conditioning, belt conveyors, etc.