Here in this content, we will understand in detail the different types of SMPS. Before proceeding further, let us have a brief introduction of-

SMPS i.e., switch mode power supply is a power supply unit that is used to deliver the power from the source to the load. Unlike linear power supplies, it involves semiconductor switching technique to provide the output signal to the load.

Generally, loads require a regulated form of dc signal as output. Through the use of SMPS, unregulated dc or ac input signal can be converted into regulated dc signal which is actually required by the load. It incorporates a switching device, which is in saturation mode when on and in cut-off mode when off. Thus, acts as an ideal switch.

The pictorial representation given below shows how SMPS is classified:

The non-isolated SMPS are the ones whose input and output circuitry are not isolated from each other. Though there many non-isolated SMPS exists, the three main types of non-isolated SMPS are Buck, Boost, and Buck-Boost SMPS. In these switch mode power supplies, no such device is used that can separate the switching circuit from that of output. Here inductors are used as energy storing elements.

While the isolated SMPS are the ones where there is isolation maintained between the input and output circuitry. Despite the existence of several isolated SMPS, the two types majorly known are Flyback Converter and Forward Converter. These switched mode power supplies make use of a transformer to separate the switching from the output. The secondary winding of the transformer acts as the energy storing element.

It is to be noted here that the switching device can be a power transistor or MOSFET.

Let us now understand how each type operates.

Buck switching regulator is the one that produces the dc output signal with a value less than the supplied input signal. Hence, is given another name, step down converter.

The figure below shows the circuit representation of the buck switching regulator:

Here, it is formed using 2 switches i.e., a transistor, Q, and a diode, D, along with an energy storing element i.e., inductor, L. The capacitor, C is used for smoothing purposes. The two modes of operation of this circuit are dependent on whether the transistor is on or off.

When a high input pulse is provided then the transistor gets on and D gets reverse biased. Due to reverse biased condition, no current will flow through the diode and the current from the transistor will reach the load through the inductor. According to Faraday’s law, the inductor will oppose the change in current. Thus, the load current shows a gradual rise with expansion in a magnetic field, meanwhile the inductor stores energy. Also, this current will charge the capacitor C, up to supply voltage, connected across the load.

When a low input pulse is provided then the transistor will get off and no current will flow through it. In the absence of external supply, the magnetic field around the inductor will not sustain thereby inducing a voltage of reverse polarity across the inductor. So, the voltage existing across the inductor will now make the diode forward biased and this time the current flows through the load via a diode. Simultaneously the charge within the capacitor is also supplied to the load. This will take place till the time transistor starts conducting again.

The average output at the load will be given by duty cycle, D:

These are used in computer systems and are about 90% efficient.

A boost type of SMPS produces such a dc output signal whose value is more than the supplied input signal. Thus, sometimes called step up converter. The figure below shows the circuit representation of the boost converter:

While when the negative pulse is present at the input, then the transistor will come in a non-conducting state. Due to the switched-off transistor condition, the diode will now be forward biased and will start conducting. In this condition, the supply input will be delivered to the load via a forward-biased diode. Also, the energy stored in the inductor will also be delivered to the load simultaneously.

So, in this case, the total energy delivered to the load will be the sum of input supply energy Vin and energy stored in inductor VL. By this same energy, the C across the load will get charged.

When again, the transistor will get on, then the capacitor charged previously will now act as a source and deliver the power to the load.

It finds applications in battery chargers and photo flashes, etc.

The buck-boost configuration of SMPS produces output whose value can be more or less than the supply input depending on the condition. The figure given below represents the circuit of buck-boost converter: 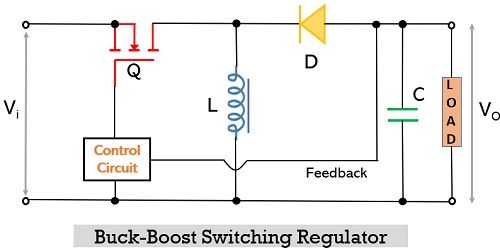 Initially, when a high pulse exists at the input then the transistor switches on, and in that condition, the current flows through the inductor and back to the supply thereby charging the inductor with the supply energy. At this time, due to the reverse biased condition of the diode no input power will be get delivered to the load.

But as soon as the low pulse is provided at the input then the transistor switches off and this makes the diode conducting due to its forward biased condition. Hence, in the off state of the transistor, the previously stored energy within the inductor (with opposite polarity) will now be delivered to the load via diode simultaneously charging the capacitor.

This provides an output voltage having inverse polarity which can be either more or less than the supply input according to the duty cycle.

The output voltage for the buck-boost converter is given as:

It is called so because it can operate in buck mode or boost mode.

In this the switching device is in complete isolation with the output circuit, the circuit representation of the flyback converter given below, clearly shows the same:

Here flyback transformer is incorporated, in which the only one of the windings conducts at a time. It acts as an energy storage and energy transfer device. To show the polarity of the two transformer windings, dots at both the windings are used.

During the high input pulse, the transistor will get on and the current will flow through the primary winding of the transformer and reaching the supply input. Due to this flow of current, the voltage will get induced in the secondary winding but it is of opposite polarity as the dots in the two windings are in different directions. This reverse polarity at the secondary winding, reverse biases the diode, D. In this condition, the charge stored within the capacitor acts as a source that delivers power to the load.

Here the turn ratio of transformer windings will determine whether the output produced will be more or less than input.

When a high input pulse is provided then the transistor gets on and the current starts flowing through the primary winding of the transformer. This flowing current in the primary winding induces a current in the secondary winding. However, unlike flyback converter, here the polarity on both the winding is the same. This forward biases the diode D0 and the current will reach the load by passing through the inductor and charging the capacitor. The flowing current will store the energy within the inductor.

But as soon as a low input pulse is given the transistor gets off and no current flows through the primary winding of the transformer. Hence, no voltage will further induce in the secondary winding. In this case, the energy stored in the inductor will forward biases the diode D and it supplies the energy to the load. After the energy within L gets completely exhausted the capacitor will further act as a source of energy.

These are comparatively complex than flyback converter and used in high power requirement applications.