Binary Number System comprises of two digits 0 & 1, thus, the base of the binary number system is 2. Thus, it is called as a base-2 system. It is much easier and simpler than decimal number system because it is comprised of only two digits.

This is clearly shown below:

We count from 0 to 9 in decimal number, similarly we can count in binary number. Consider a number 2 in decimal. To convert this number into binary we need to start count from 20, which is equal to one. But we need 2. Thus, the successive number in counting will be 21, it is equal to 2, thus the binary equivalent of 2 is 0010, we have to place 1 when power raised to 2 is considered.

When the 2 raised to positional number is not considered than we will write 0 on that place. 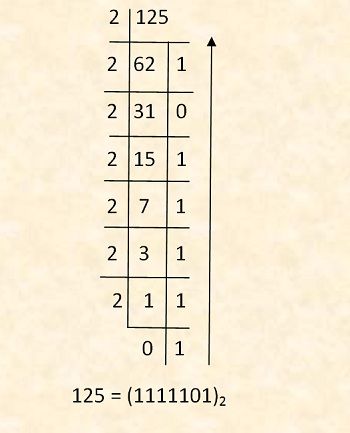 The result is the required binary digits. Thus, the given decimal number is converted into binary number.