It is given the name ‘boost’ because the obtained output voltage is higher than the input voltage.

We have already mentioned in the beginning that boost converters are types of chopper circuits. In chopper circuits, we have discussed that it performs dc to dc conversion, i.e., a fixed dc voltage is changed into an adjustable dc voltage.

It is to be noted here that since the product of voltage and current results in power then with the increase in the output voltage, the output current through the circuit will automatically decrease.

In chopper circuits, power MOSET, BJT, IGBT, etc. are used as switches while the thyristors are not used for such purposes and the reason for the same is that an external commutation circuit is needed in order to commutate the device.

The figure given below is the circuit representation of the boost converter: 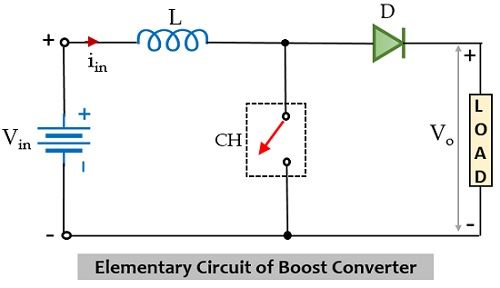 The circuit here is an elementary form of step-up chopper which necessarily requires a large inductor L in series connection with the voltage source. The whole circuit arrangement operates in a way that it helps in maintaining a regulated dc signal at the output.

Let us understand how the given circuit operates in order to provide an increased dc signal at the load.

Initially, when the chopper CH is in on state, then in the presence of supply dc input current begins to flow through the closed path of the circuit i.e., passing through the inductor as shown in the figure below. 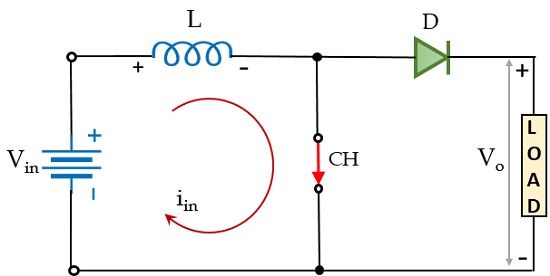 Here, the polarity of the inductor will be according to the direction of the flow of current. In this particular case, the diode in the configuration is in reverse biased condition and so current will not be allowed to flow through that particular part of the circuit during on state of the chopper. Resultantly, the voltage across the chopper will appear across the load.

Thus, the total voltage across the load will be given as:

This means that the output voltage exceeds the applied input voltage. Thus, performs step-up conversion as the energy stored within the inductor during the Ton period is released during the Toff period.

During the Ton period, the voltage across the inductor will be given as:

Let us have a look at the waveform representation of the step-up chopper shown below: 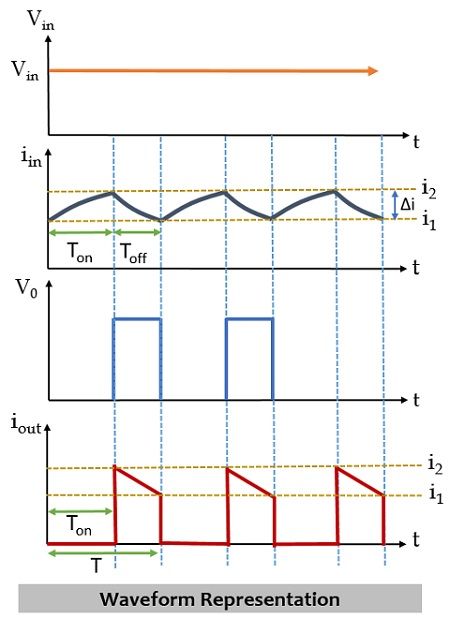 Considering that output current is varying linearly, the energy input provided by the source to the inductor, when CH is on, is given as:

Further, the energy that the inductor releases to the load when CH is off is given as:

For a lossless system, comparing the two energies, we will have, 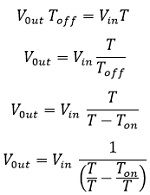 Thus, we can conclude here that the average load voltage can be stepped up with the change in the duty cycle.

Due to the operating principle of step-up choppers, these find applications in the regenerative braking of dc motors. Along with this, these are used in various consumer electronics, battery power systems, power amplifier circuits, power factor correction circuits, automotive equipment, etc.