Definition: A modulation technique that converts or encodes message signal into a binary bit stream is known as Delta Modulation. Here only 1 bit is used to encode 1 voltage level thus, the technique allows transmission of only 1 bit per sample.

As PCM has the property of converting message signal directly into a sequence of a binary coded pulse, this resultantly increases the bandwidth requirement of the system. So, in order to remove the drawbacks of PCM, delta modulation is used.

The operating principle of DM is such that, a comparison between present and previously sampled value is performed, the difference of which decides the increment or decrement in the transmitted values.

Simply put, when the two sample values are compared, either we get difference having a positive polarity or negative polarity.

Hence, allowing only a single binary bit to get transmitted for each sample.

Let us first understand the generation of delta modulated signal.

The block diagram for the generation delta modulated signal is shown below: 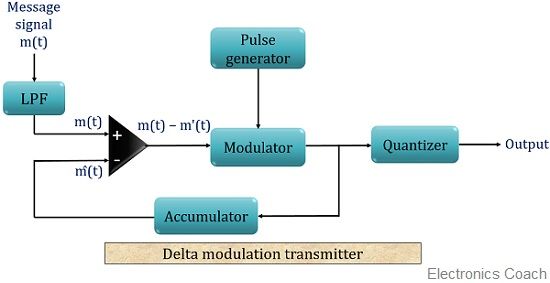 As we can see the above figure consists of an LPF, a comparator, a product modulator along with pulse generator and quantizer. Here, a feedback path is also provided to the circuit, where the output of modulator acts as input to the comparator.

The output of LPF is then given to a comparator unit, which compares the message signal m(t) with an arbitrary signal m'(t) for the first time. The comparator after comparing 2 signals generates the difference between the two.

The difference can be of either positive polarity or negative polarity. This depends on message and arbitrary signals that are getting subtracted.

The output of the modulator is a pulsed signal whose pulses will be of equal magnitude having polarity either positive and negative.

If positive magnitude pulse is provided to the quantizer as its input then quantizer performs increment by 1 step size, Δ. It is very easy to understand that positive pulse at the output of the modulator shows that message signal is greater than the arbitrary signal. Thus quantizer increases Δ by 1.

Similarly, in the case of negative magnitude pulse, the step size gets decreased by 1. This is so because m'(t) exceeds m(t), thereby generating a pulse of negative polarity.
Thus, quantizer decreases Δ by 1.

The output of the modulator at the same time, through a feedback path, is provided to the accumulator.

Hence the process repeats in such a manner.

The figure below shows the delta modulation waveform: 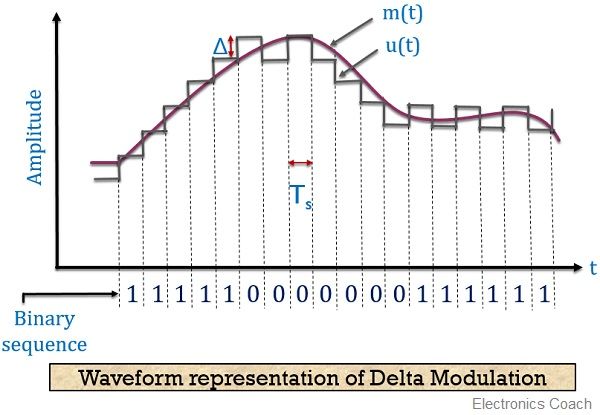 Here, the analog input signal is m(t) and the quantized signal is denoted by u(t). The binary sequence according to the step size that is actually transmitted is shown at the bottom of the figure shown above.

The figure below shows the block diagram for the representation of detection of delta modulated signal.

The detection circuitry basically consists of an accumulator and an LPF. The binary signal transmitted is provided to the accumulator section.

If here the input is binary 1 then after a delay the output of the accumulator shown increased step size +Δ. However, in the case of binary 0 as input, a decrease in step size is noticed. This generates the staircase signal equivalent to the message signal.

The output of the accumulator is provided to the LPF that smoothens the staircase signal in order to regenerate the original message signal.

It is widely used in radio communication devices and digital voice storage and voice information transmission where signal quality is less important.