Simply put, the pulse displacement is directly proportional to the sampled value of the message signal.

To understand the generation of the PPM signal, it is necessary to understand Pulse Width Modulation (PWM or PDM). PWM is the first type of PTM and is discussed in the previous content.

The information is transmitted with the varying position of the pulses in pulse position modulation.

The basic idea about the generation of a PPM waveform is that here, as the amplitude of the message signal increases, the pulse shifts according to the reference.

Now, the question arises how the position of the pulses show variation?

As we have already discussed that a PPM signal is generated in reference to a PWM signal. Thus, the trailing edge of the PWM signal acts as the beginning point of the pulses of PPM signal.

The figure below shows the block diagram for generating a PPM signal:

Here, we have made a detailed block diagram where first, a PAM signal is produced with is further processed at the comparator in order to generate a PWM signal.

This is why a pulse of PPM signal begins with the trailing edge of the PWM signal.

It is to be noted in case of PPM that the duration for which the output will be high depends on the RC components of the multivibrator. This is the reason why a constant width pulse is obtained in case of the PPM signal.

With the modulating signal, the trailing edge of PWM signal shifts, thus with that shift, the PPM pulses shows shifts in its position.

The figure below shows the waveform representation of the PPM signal: 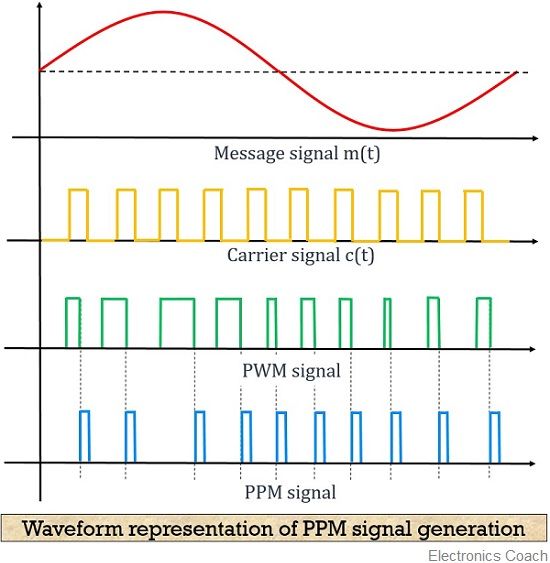 Here, the first image shows the modulating signal, and the second one shows a carrier signal. The next one shows a PWM signal which is considered as reference for the generation of PPM signal shown in the last image.

As we can see in the above figure that the point of ending the PWM pulse and the beginning of PPM pulse is coinciding, which can be clearly seen from the dotted line.

The figure below shows the block diagram for the detection of a PPM signal at the receiver:

The PPM signal transmitted from the modulation circuit gets distorted by the noise during transmission. This distorted PPM signal reaches the demodulator circuit. The pulse generator employed in the circuit generates a pulsed waveform. This waveform is of fixed duration which is fed to the reset pin (R) of the SR flip-flop.

These set and reset signals generate a PWM signal at the output of the flip-flop. This PWM signal is then further processed in order to provide the original message signal.

The technique is used in an optical communication system, in radio control and in military applications.