The crucial difference between CRT and LCD exist in their image forming technique. CRT displays image on the screen by making use of electron beam, however, LCD utilizes liquid crystals for the formation of an image on the screen.

Another major difference that exists between CRT and LCD is their size and dimension. CRT monitors are thicker and heavier but small in size than that of LCD.

We will discuss some other important differences between CRT and LCD but before that have a look at the rough draft of the contents to be discussed under this article.

CRT is expanded as Cathode ray tube. It is a vacuum tube that produces images when a sharp beam of the electron which is highly focused hits the phosphor screen that is present at the front-end of the tube.

CRT was widely used earlier in TV and computer screens but is lesser used nowadays.

It consists of certain basic components that are responsible for the generation of an image on the screen. The figure below shows internal system involved in a CRT: 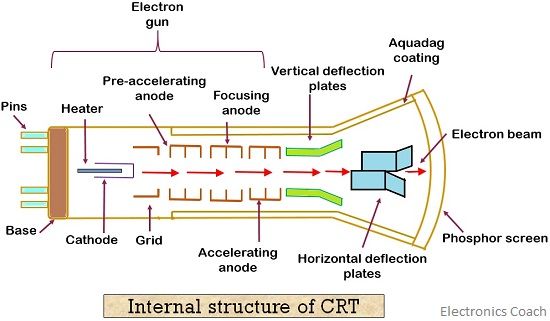 An electron gun assembly is present that produces a sharp beam of electrons. These electrons when moves inside the tube experience acceleration by the anode and focused towards the screen.

The two deflection plates are the reason for the movement of the beam horizontally and vertically. However, as the two movements are not dependent on each other thus the beam after hitting the screen, gets fixed anywhere on it.

When we talk about the screen of CRT then it is basically termed as the faceplate. The inner surface where the beam strikes is basically a phosphor coating. This phosphor is responsible for the conversion of electrical energy generated by the movement of the electron beam into light energy.

It is noteworthy in case of CRT that phosphor screen generates secondary electrons when electron beam hits it. So, in order to sustain an electrical equilibrium, the secondary emitted electrons must be collected which is done by aquadag.

LCD stands for Liquid Crystal Display. In LCD liquid crystal is utilized in order to generate a definite image on the screen. Liquid crystal is basically termed as the fourth state of matter. It permits the display to be very thin and thus supports numerous applications.

When we talk about LCD then its principle of working is such that light energy is not produced by LCD, despite light energy generated by an external source is controlled in order to have light or dark appearance at some particular areas.

An LCD is comprised of several layers shown in the diagram given below: 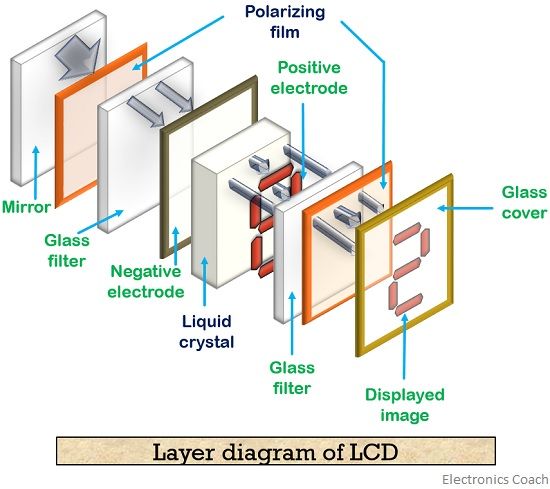 A backlight present at the back end of the screen emits light that after passing through the polarizing film gets polarized. The light can be horizontally or vertically polarized that rely on the type of polarization filter.

An external potential is provided to the liquid crystal. This potential changes the orientation of the molecules. After this polarized light is passed to the crystal that generates bright and dark spots at the screen of the display.

Key Differences Between CRT and LCD

CRT and LCD both have their separate advantages and disadvantage over the image formation technique. But LCD has replaced CRT very efficiently in the recent era. Despite LCD is more costly than CRT but due to its better image display and almost negligible flickering property, it is widely used.