Definition: Cathode ray tube, CRT is the heart of CRO which generates images when electron beam from the back of the tube strikes the fluorescent screen with sufficient energy. CRT technique was basically employed in conventional TV and computer screens.

CRT consist of the following parts:

The diagram given below shows the internal structure of the CRT 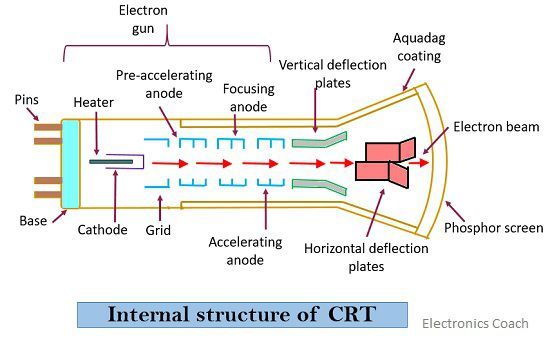 A sharply focused beam is produced by the electron gun assembly. This high-velocity beam strikes the fluorescent screen thus causing a luminous spot on the screen.

The two electrostatic deflection plates deflect the accelerated beam by the application of voltage. This applied voltage enable the beam to move vertically up – down and horizontally from an end to other.

The two movements are not dependent on each other that causes the beam to be arranged anywhere on the screen.

CRT parts are confined in a glass envelope in order to permit free movement of the electron from an end to the other.

The cathode is heated indirectly from which electrons are emitted. To obtain high emission of electrons at a moderate temperature a layer of barium and strontium oxide is deposited at the end of the cathode.

An indirectly heated cathode requires current and voltage value 600 mA at 6.3 V. In the case of a highly efficient system the value is 300 mA at 6.3 V.

The emitted electrons further pass through a small hole present in the control grid. The control grid is basically a nickel cylinder of aperture 0.5. It is a low permeability steel material. The intensity by which beam of electron moves depends entirely on the electron emitted from the cathode. The number of electrons emitted from the cathode is controlled by the grid.

A positive high potential is applied at the pre-accelerating anode by which the beam gets accelerated. This high positive potential is about 1500 V. Focusing anode helps in focusing the electron beam and is connected with a lower adjustable voltage of about 500 V.

The highly focused beam moves towards vertical and horizontal deflection plates after which it reaches to fluorescent screen.

Focusing of an electron beam is accomplished by two different methods- Electrostatic focusing and Electromagnetic focusing.

In the figure shown below, we can see an electron placed at rest in an electric field produced two parallel plates. 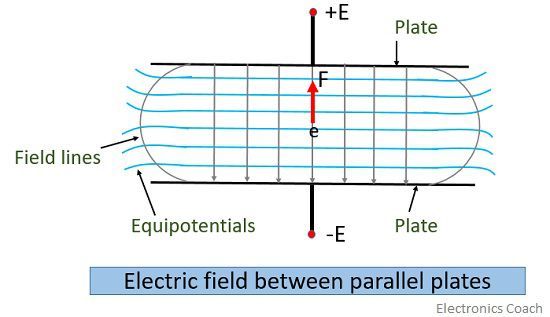 Force on an electron is

The negative sign indicates that the acting force is opposite to that of the field.

It is necessary that the field is of uniform intensity where the electron is placed. The lateral repulsion of electric field lines causes spreading of spaces between the field lines which results in curved lines at the ends. This is the reason why field intensity is less at the ends. 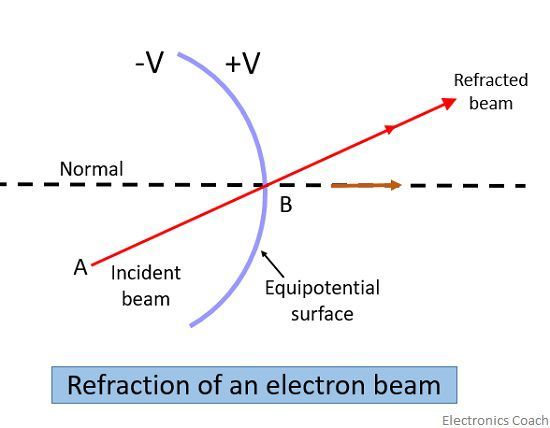 Now, let’s have a look at the functional diagram of the electrostatic focusing arrangement 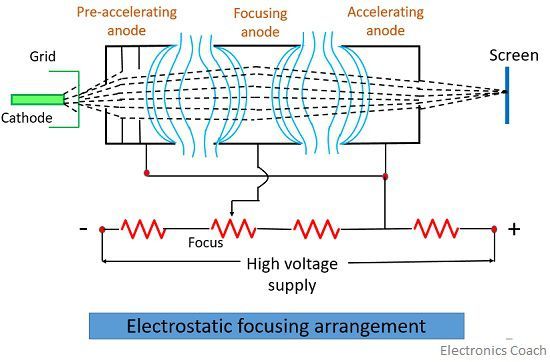 The beam that enters the field at angles other than normal will be deflected towards the normal and thus causing the beam to be focused towards the centre.

The figure below describes the basic arrangement for electrostatic deflection. 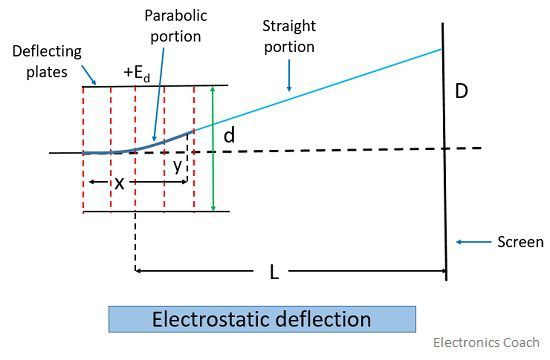 A potential is applied between two parallel plates. A uniform electrostatic field is produced by these plates in the Y direction. Thus the entering electron will experience a force in the y-direction and will be accelerated in that particular direction. There is no force in X and Z directions resulting in no acceleration in these two directions.

After departing from the deflection plates, electrons move in a straight line and sometimes it is hard to deflect a highly accelerated beam called “hard beam”.

After passing beyond the deflection plates, the electron may and may not experience additional acceleration. But this primarily depends on maximum frequency applied to CRT.

In the electrostatic deflection system, a low value of accelerating voltage must be used and this voltage usually kept below 4 KV. This low value gives better sensitivity but leads to the reduction in brightness. If maximum frequency to be displayed is below 10 MHz generally monoaccelerator tubes may be used.
When the displayed signal frequency is more than 10 MHz, post-deflection acceleration is necessary so as to increase the brightness of the traces.

The plates are flared so that the beam can pass through it without striking.

The front portion of the CRT is the faceplate. It is flat for small screen sizes to about 100mm Χ 100mm dimension and is slightly curved in case of larger displays. Some faceplates are made entirely from fibre optics, having special characteristics.

The inner surface of the faceplate is coated with a phosphor. The electrical energy gets transformed into light energy by the action of phosphor. When an electron beam strikes the phosphor crystal, it raises their energy level.

This is known as cathodoluminescence. During phosphor excitation, light is excited and this is called fluorescence.

To have a flicker-free display, a phosphor must be refreshed by electron before the end of its decay time. Phosphor having lower persistence requires more frequent refreshes. In case of use in radars, long persistence is needed. It is even needed in storage types oscilloscopes. Electron beam on striking phosphor gives off light and heat.