Definition: Thermionic effect or Thermionic Emission can be defined as the phenomenon in which electrons are emitted from the surface of the metal when heat energy is applied to the metal. The word Thermionic is formed from the words Thermal and ions. Thermal means heat and ions are charged particles.

Significance of Thermionic effect in Electronics 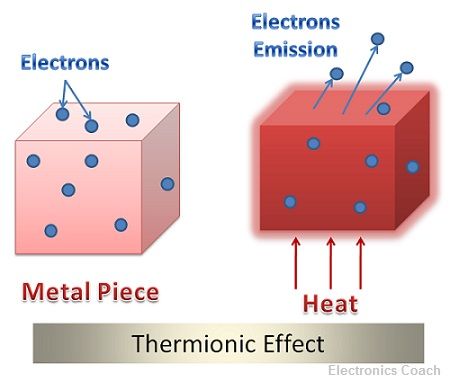 The entire arrangement of emitter metal is placed inside the evacuated tube or tube filled with inert gases. If it is placed in the open atmosphere, the metal which is heated to high temperature will react with the oxygen present in the atmosphere. This leads to deterioration of the metal.

Thus, if it is placed in evacuated space or space filled with inert gases, the metal will be preserved because inert gases do not react with any metal element due to their complete atomic configuration.

The electrons emitted during the process of thermionic emission depends upon the surface area of the metal surface and the temperature of the surface. It can be expressed mathematically with the help of equation given by O. W. Richardson Dushman.

The value of proportionality constant which is also termed as Plank’s Constant is 600,000 for most of the metals, but it can vary with the varying characteristics of the metal.  The below equation can determine the value of b. It is dependant on the particular features of the metal. Thus, it is constant for a particular metal, but it shows variation with varying temperature.

Thus from the above equation, it is clear that to achieve maximum emission, we need to have two things. Either works function of the metal should be low, or the temperature of the metal surface should be high. If we can achieve the conditions mentioned above, a significant number of electrons will leave valence band and enter into the vacuum.

The values of these constant for some metals are given in the table below. Besides, the maximum current which flows at a particular temperature is called the saturation value of the temperature.

Understanding Thermionic Effect with the help of Analogy

Consider an example of boiling water; the water will start boiling, only when the heat energy applied to it will be sufficiently high. If the applied heat energy is not high enough to attain its boiling point, the water will not boil.

The emission particles are known as thermions. The emission of these thermions is dependent on certain factors. Let’s put light on the factors controlling thermionic effect.

Thus, the rate of emission of thermions can be increased, if the metal with low work function is utilised for this purpose.

The diagram below illustrates the variation of thermionic current density with the temperature of the metal emitter. 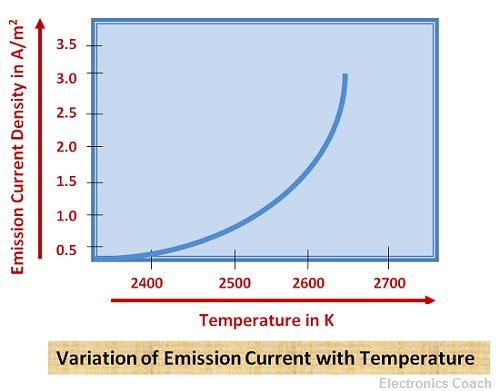 It is clear from the above graph that the emission current density varies linearly with the increase in temperature.