Definition: Photoelectric emission is the phenomenon by which intensity of light is utilized for the removal of the electron from the atom. The word Photoelectric is formed from two words photo which means light (Photons) and electric which is related to electron. Thus, light radiation or photons impart their energy for electron emission. That’s why it is called photoelectric emission.

Photoelectric emission is significant for determining the intensity of incident light. If the intensity is high, then the electron emission will also be more.

The alkaline metal possesses lower work function, due to which electron can be easily detached from their outermost shell. Metals such as sodium, rubidium, caesium etc. possess these characteristics. 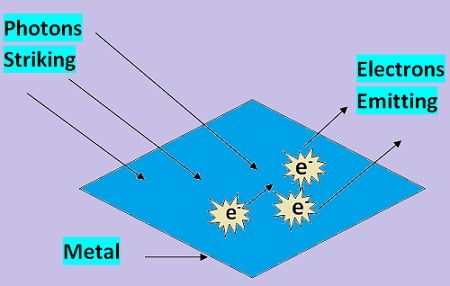 In this state, if energy equal to their work function is provided to them then they will emit electron. This electron will generate current. 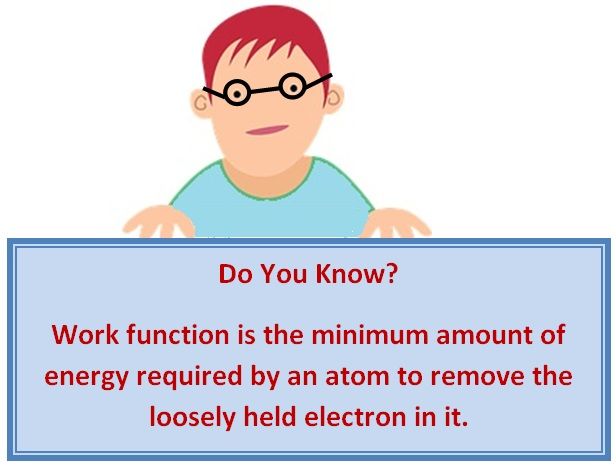 In the diagram below, the photoelectric emission is illustrated. In this, an emitter is placed inside the glass envelope. An anode is also used for the emission. The light source used here is a natural source of light, i.e. Sun.

When the light rays fall on the emitter which is made up of alkaline metals having low work function, the electrons will get excited. This is because the electrons are on higher energy level. The more the energy, the more will be instability. 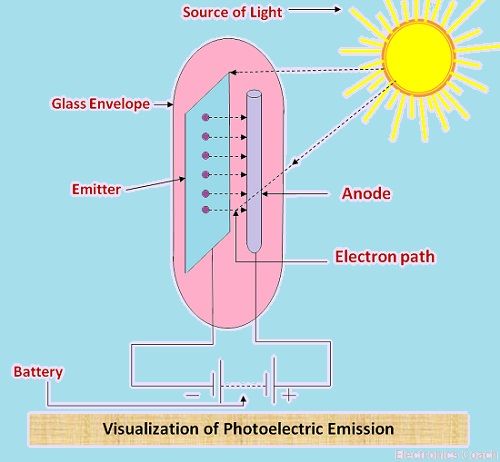 The source of energy can be in any form either light rays, or ultraviolet rays can be used to provide emission. The light rays consist of photons while the ultraviolet ray’s energy is termed as quanta. In this, we have used photons which are striking the emitter and providing emission. Thus, this type of emission is called photoelectric emission.

Similarly, the frequency of the incident rays should be sufficiently high to provide energy to the electrons so that they leave their outermost shell. Thus, f0 is the minimum frequency which is required for the light rays to produce the effect of photoelectric emission.

The higher the frequency, the more will be the energy or intensity of light. Consequently, more energy will be imparted to the electron so that it will get converted into kinetic energy.

The voltage V is provided in the circuit to reduce the velocity of emitted electrons because sometimes they get the extremely high kinetic energy that they can even come out of the glass envelope.

The entire arrangement is placed inside the evacuated glass tube. The anode is placed together with the emitter to absorb the emitted electron. Thus, the current flows in the external circuit.