Now, before discussing some other important differences between photodiode and phototransistor have a look at the contents to be discussed in this article.

It is a semiconductor device having 2 terminals that produce current when exposed to light. Photodiode works on the principle of photoelectric effect thus convert light energy that falls on the surface of the material into electrical energy. As the intensity of incident radiation increases, the current through the device also increases.

A photodiode is basically designed for reverse biased operation. Let us have a look at the biasing arrangement of the photodiode. 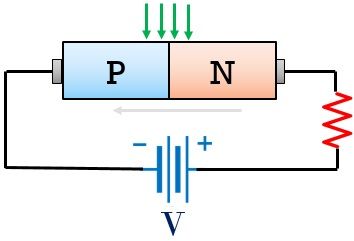 We are already aware of the fact that reverse saturation current flows through the device in reverse biased condition of a diode. Thus, in the case of photodiode also, a reverse current is the result of the thermally generated electron-hole pair by the action of light.

As the intensity of the incident radiation increases, temperature increases, resultantly current increases. The light energy that falls on the junction is responsible for charge carrier generation hence for current.

Sometimes, current is noticed in the device without any exposure to light rays, this is known as dark current.

It is a device almost similar to normal junction transistor. However, the only variation that exists is a large area of the base-collector region. In phototransistor, base current is not supplied as input, instead of it, light energy is provided that is used to trigger the transistor. This supplied light energy generates an electric current through the device due to the photoelectric effect.

It can be a two or three terminal device depending on the existence of the base terminal.

The figure below shows the general construction of a phototransistor.

The light rays are exposed to a photosensitive base region and the output is taken through the collector terminal of the transistor.

When light energy falls on the device, electron-hole pairs are generated. These electrons after overcoming the barrier potential, move from the emitter to collector. This movement generates an electric current in the device. The intensity of emitted light determines the magnitude of the electric current.

It is noteworthy here that, the output current of a phototransistor lies in milliamps however switching occurs in microseconds.

Key Differences Between Photodiode and Phototransistor