Definition: Multiplexer is a combinational logic circuit which allows only one input at a particular time to generate the output. The signals which control which input will be reflected at the output end is determined by the SELECT INPUT lines. A multiplexer is often written as MUX in the abbreviated form. It is also called as Many-to-One circuit. This is because of its ability to select one signal out of many inputs.

The MUX is a very crucial component of the communication system. This is because, in such systems, we need to select a single channel from various other channels.

A multiplexer can be considered as a digitally controlled switch. The controlling code which selects a particular input line can be given as binary input in the form of selection line. The output will be one of the inputs given to MUX, which is decided by selection lines. 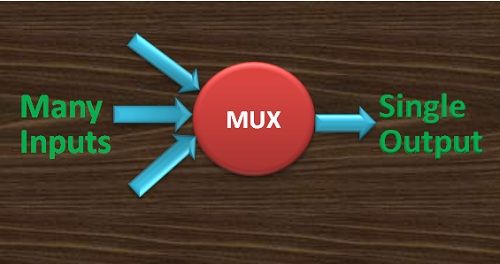 The Circuit of the MUX along with input and output terminals can be understood with the help of the below diagram. 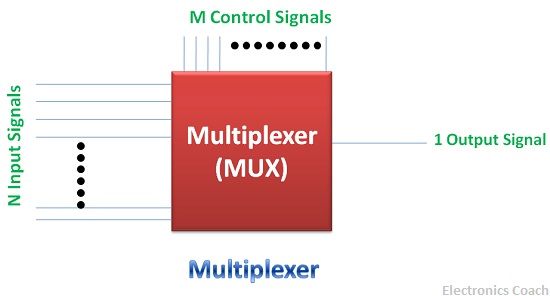 A multiplexer can be designed with various inputs according to our needs. If we have four inputs and we want to select a single one then we can use four-to-one (4:1) MUX. If we have 8 inputs we can design a multiplexer with 8 input lines, but the selection line should be in accordance with the above-mentioned equation.

In this article, we will discuss the designing of 4:1 MUX with the help of its circuit diagram, input line selection diagram and truth table.

In 4:1 MUX, there will be 4 input lines and 1 output line. And to control which input should be selected out of these 4, we need 2 selection lines.

Thus, it is evident from the diagram below that D0, D1, D2 and D3 are the input lines and A, B are the two selection lines. The combination of binary numbers given as a selection line will determine the output of the MUX. 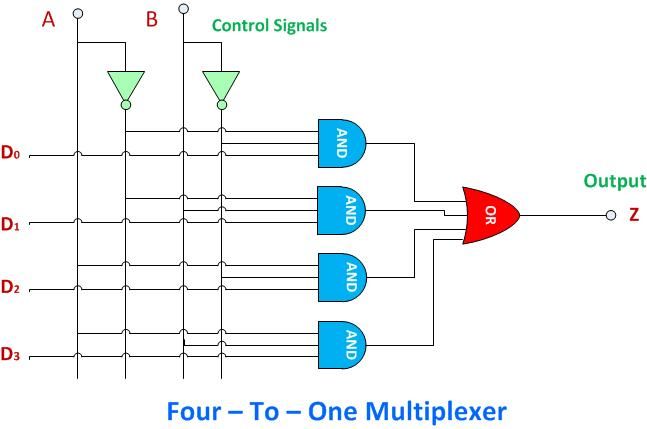 Now, there will be 4 cases as described below:-

Case 3: When the selection line A is 1 and B is 0 then the input line D2 will be generated at the output. In this scenario, the MUX will allow only D2 to pass through it and other input will be blocked.

Case 4: When both the selection line represents 1, then the last input line will be selected i.e. D3. In this case, the MUX will allow the only D3 to pass through it and other input lines get blocked from passing through MUX.

In the above diagram, the Multiplexers are defined for each case. For every combination of the selection line, one input is selected.

Multiplexer is a crucial combinational circuit which is used in various significant application. Multiplexers can select data input lines as per our requirement. This is the reason multiplexers are often termed as “Data Selectors”. These find application in various realms of digital and as well as analogue electronics.

Some of the significant applications are described below:-

The best thing about analogue switching by multiplexer is that the analogue switching current assumes an extremely low value in the range of 10mA-20mA. Due to such a low magnitude of the current, the heat dissipation is very low.