Definition: The Electronic Multimeter is a device which is used for the measurement of various electrical and electronic quantities such as current, voltage, resistance etc. The multimeter name is given to it to define its ability to measure multiple quantities.

It is provided with inbuilt power supply necessary for the functioning of the device. Any component such as a resistor, battery can be connected to its outer probes for the measurement of the electronic quantity. In order to understand how a single meter can measure multiple electrical quantities, we need to look into its constructional feature and the components which make it a multimeter.

Construction and Components of Multimeter

The multimeter basically consists of a bridge DC amplifier, rectifier, PMMC meter, function switch, internal battery and an attenuator. The function of the attenuator is that it helps to select a particular range of voltage values. The rectifier is essential in a multimeter for the conversion of AC voltage into DC voltage. The internal battery is needed for the operational mechanism of the multimeter. 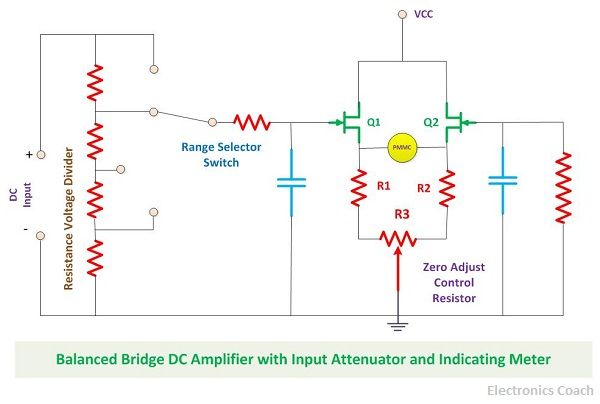 The Bridge DC amplifier is nothing but two Field effect transistor connected opposite to each other with three resistors and forming a bridge-like structure. The two resistors are for balancing the bridge, and the third resistor is a zero adjust control resistor.

Working of the Multimeter

The Multimeter performs its operation by providing the input voltage to the gate terminal of the FET, and this gate voltage is responsible for the increase in the source voltage of the FET. The PMMC meter is connected between the two FET.

In the ideal condition, no current should flow from PMMC meter so thus it must show zero deflection, but in the practical implementation, the PMMC meter shows some deflection. This is undesirable in steady state. Thus a zero adjusts control resistor is used for adjusting the value of current to zero. After this again, the PMMC shows no deflection.

There are series of steps which is to be followed while measurement. First, the multimeter should be tested whether is it working or not. If it is not working the battery requirements of the device should be checked.

Measurement of Resistance by Multimeter 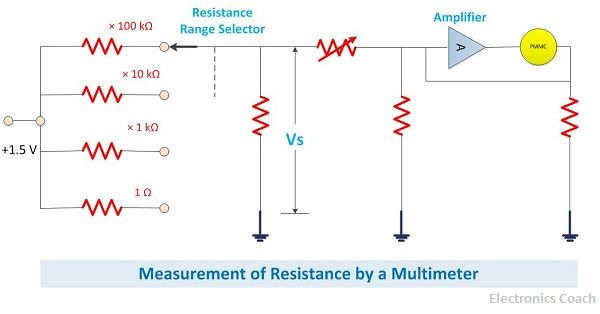 There are various resistors that are connected in parallel; all these resistors possess different values of resistance. The range which is to be measured can be set and also a particular range of value of resistance can be connected to the unknown resistor.

The Amplifier connected in series amplifies the signal. The signal gets distorted as it passes through the circuit. Moreover, the current also flows from that path in which the resistor is connected. And we all are aware of the fact that the value of voltage drop across the resistor is directly proportional to the value of the resistor.