The fast recovery diode is constructed in the similar manner by which ordinary diode is constructed. The major difference in construction between these diodes and conventional diodes is the presence of recombination centres. In fast recovery diodes, Gold (Au) is added to the semiconductor material. This leads to augmentation in the numerical value of recombination centres due to which the lifetime (?) of charge carriers decreases.

Consider an AC signal of low frequency, now if it is used in an application where low voltage DC is required. Then, in this case, we need a rectifier for converting AC to DC. If we will use a conventional diode for rectifying the AC signal, then it may rectify efficiently.

But if we want to rectify high-frequency AC signal then the diode may not work properly. The reason behind this is that at low frequencies the width of signal pulses is more i.e. there is sufficient time for a diode to change its state between positive half of cycle and negative half of cycle.

It can be understood like the signal is striking slowly. Thus, diode easily switches between positive half signal and negative half signal. But this is not the case when high-frequency signal strikes diode for rectification.

Fast recovery diodes are employed for such application. The addition of Gold (Au) in Gallium Arsenide (GaAs)increases the density of recombination centres in the semiconductor material. Due to which the lifetime of charge carriers (?) reduces and they recombine quickly and the recovery time reduces.

Thus, by the addition of such material in the semiconductor, we increase the switching speed of the diode up to a large extent so that they can be used for the high-frequency application. They have quick recovery time that’s why they are called fast recovery diode or fast rectifier diode. 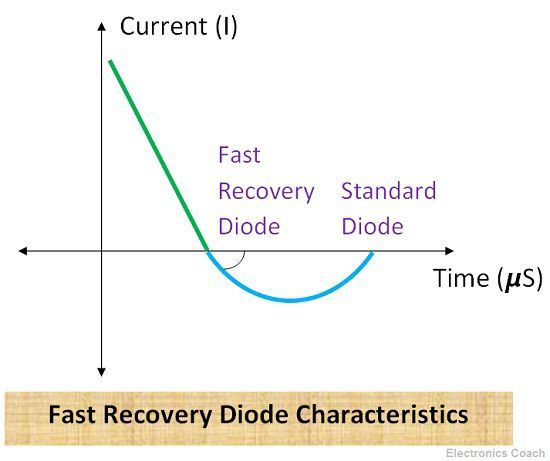 The fast recovery diode can be classified into two types on the basis of its construction. One is formed by diffused P-N junction and the other is metal semiconductor diode. The metal semiconductor diodes possess ultra high switching speed because they involve only majority charge carriers. And the effect of minority charge carrier storage is negligible.

They are also classified on the basis of maximum average rectified current, packaging type and operating voltage.

It possesses high reverse current when recombination centres are increases by adding Gold(Au).