Definition: A backward diode is a semiconductor device which works in reversed biased mode. It is designed by providing variation in the design characteristics of Zener diode and tunnel diode. It is unilateral device because its designing mechanism allows it to operate in one direction only.

It is designed for specific purpose. It works in the same way in reverse biasing as the conventional diode operates in forward biasing. The negative resistance characteristics of tunnel diode are used in the backward diode.

The operation of the diode takes place in reverse biasing mode thus, it is called backward diode. 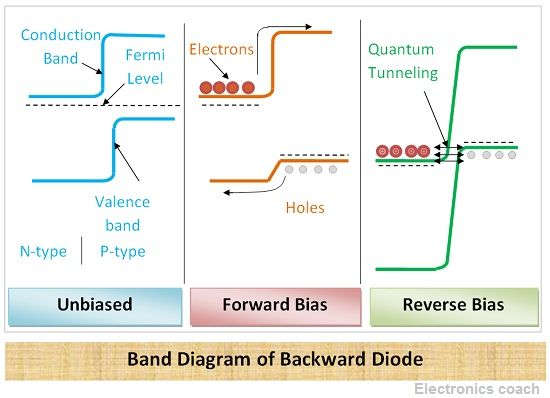 Thus, the current flows even in reversed biased condition. When forward biasing is applied, the N-side moves up with respect to P-side. Thus, the filled valence band of the N-type semiconductor will be just opposite to empty conduction band of P-type.Thus, the electrons flow from N-type to P-type.

The Backward Diode is operated in a reverse biased mode. The negative resistance region is created and this region is utilized for the operation of the diode.

The reverse characteristics are similar to the characteristics of the Zener diode. The forward characteristics can be understood with the help of the below diagram. Initially, current increases with an increase in voltage, but after a particular time, the magnitude of current becomes constant. It does not show a significant increase even if the variation in voltage is large. 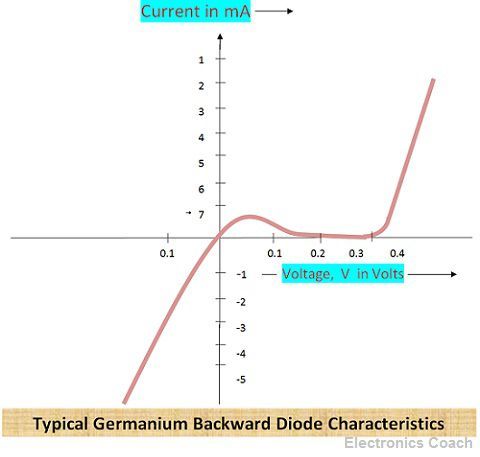 While the conventional diode break point is not low thus, it cannot withstand high voltage and if the voltage exceeds 0.6 V-0.7 V the diode breaks down.

This is all about backward diode. Its ability to possess low capacitance is utilized in switching application. Besides, it also finds significance in rectifier circuits.