Definition: Function Generator is basically a signal generator that produces different types of waveforms at the output. It has the ability to produce waveforms such as sine wave, square wave, a triangular wave, sawtooth wave etc. An adjustable frequency range is provided by the function generator which is in the range of some Hz to several 100KHz.

Function Generator is a versatile instrument as an extensive variety of frequencies and waveforms are produced by it. The various waveforms generated by the function generator are suitable for various applications. It provides adjustment of wave shape, frequency, magnitude and offset but requires a load connected before adjustment.

This instrument not only varies the characteristics of the waveform but also has the capability to add a dc offset to the signal. Mostly these are only able to operate at low frequency but some costly models can also be operated at the higher frequency.

As we have discussed earlier that it can generate 2 different waveforms simultaneously at the two different terminals. So, it can be a useful feature as different output are required for particular applications. It provides another important feature as they have the capability of phase locking to an external source.

The figure below shows the block diagram of the function generator- 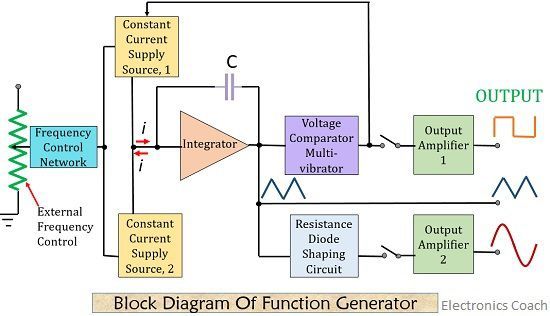 A frequency control network used here whose frequency is controlled by the variation in the magnitude of current. The current sources 1 and 2 drives the integrator.

By using Function Generator, we can have a wide variety of waveforms whose frequency changes from 0.01 Hz to 100 KHz. The two current sources are regulated by the frequency controlled voltage.

A constant current is supplied to the integrator by current supply source 1. Due to this, the voltage of the integrator rises linearly with respect to time. This linear rise is according to the output signal voltage equation:

The Voltage Comparator Multi-vibrator present here cause variation in the state of the integrator output voltage at a previously determined maximum level. Due to this change of state, the current supply from source 1 cuts off and switches to supply source 2.

The resistance diode network employed in the circuit changes the slope of that triangular wave with distortion less than 1%. The output amplifier thus helps to provide two waves at the output simultaneously. This captured signal can be displayed by using an oscilloscope.

Function generator provides a wide variety of applications such as in RF-related operations, automotive applications, in educational, medical and industrial fields etc.

Intersil manufactured IC 8083 known as ICL 8083 has a tremendous capability of generating various types of waveforms. It uses 3 separate output terminals over a frequency range from 0.0001 Hz to 1 MHz

Let’s have a look at the Pin diagram of ICL 8083 shown below: 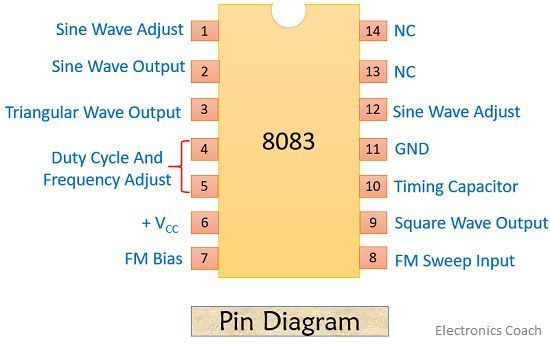 These are used for connecting external resistors to minimize sinusoidal waveform distortion.

These are used to connect external resistors with that to external capacitors C known as timing capacitor, connected to pin 10 to determine the duty cycle and frequency of the outputs. 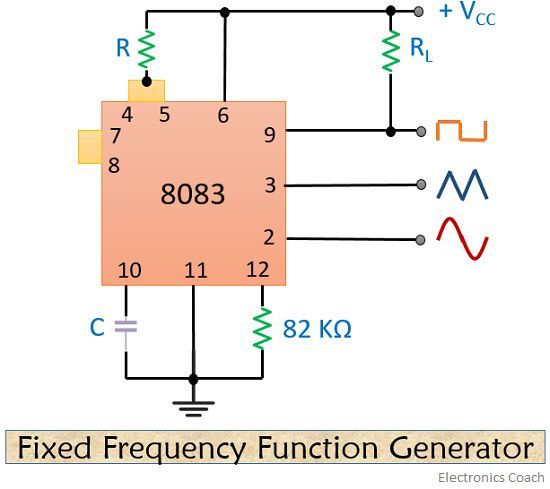 This pin is connected with an external voltage to adjust the output frequency.

These two pins denote no connection.

So, we can conclude that a Function Generator is an electronic equipment that generates various electrical waveforms. They cover operations of both audio and RF frequencies.