Definition: The circuit that produces a linearly varying voltage or current with time is known as Time-Base Generator. It is basically a function generator that generates a sawtooth waveform of high frequency. These circuits are also known as sweep circuits. This is so because they are used to sweep the beam of electron across the screen in a horizontal direction in CRO.

These are basically of two types:

A CRO basically measures or display a quantity that varies according to the time. This needs CRT spot to move with a constant velocity that resultantly requires a linearly varying voltage to be applied at the set of a deflection plate. 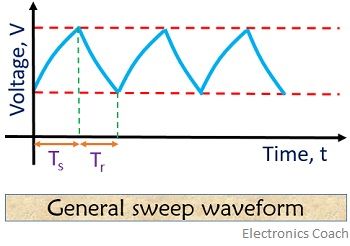 Here, we can see that the linearly varying voltage starts from a point, it can be 0 and returns to the same point after reaching the peak value.

The duration of time at which there is a linear increase in the voltage of the waveform is known as Sweep time and denoted by Ts. On the other side, the time duration required by the signal to return to its initial value is known as Restoration time or retrace time Tr.

Normally the output generated by a sweep circuit is shown above i.e., sweep voltage waveform. However, an idealised output is a sawtooth waveform that results when Tr  is very small or negative with respect to Ts. That particular ideal sawtooth or ramp voltage waveform is shown below. 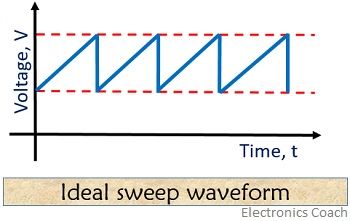 In the case of an idealised waveform, the sweep produced voltage becomes exactly linear and the retrace time is 0 that is shown in the figure above.

In a sweep generator, there is a need to keep sweep speed constant with time. The variation in sweep speed results in non-linearity of the slope of sweep voltage. This error is known as sweep speed error and is given as

It is the ratio of the maximum difference between actual and linear sweep voltage to the peak value of sweep voltage. It is given as

The figure below shows the graphical representation of the displacement error: 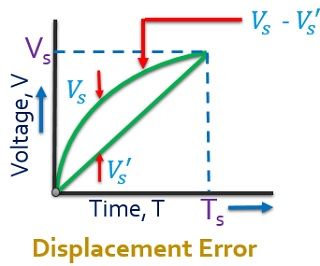 It holds significance in timing application and defines non-linearity of a signal.

Transmission error: It is a result of passing sweep voltage through a high pass R-C network because the maximum amplitude of output deviates from the input. It is given as

The figure below shows the transmission error in a sweep waveform: 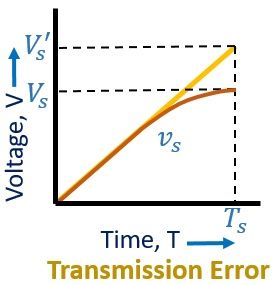 It is practically not possible to obtain exact linearity in sweep voltages, thus, different methods are developed to achieve it. The methods are discussed below:

The most commonly used methods of sweep voltage generation among all the above is exponential charging and miller sweep and bootstrap time-base generators.

In a time-base generator, the displacement error is less ascendant as compared to the sweep speed error.