The answer to this question is, in the case of complicated circuits such as Bridge and T-networks we cannot find current and voltage circulating in circuit simply by using Ohm’s law.

The origin of Kirchhoff’s Circuit law lies in mid of 19th Century, i.e.  in 1845 a famous Physicist from Germany Gustav Kirchhoff used the basic principle, “Energy can neither be created nor be destroyed” and came up with rules based upon conservation of charge and energy. 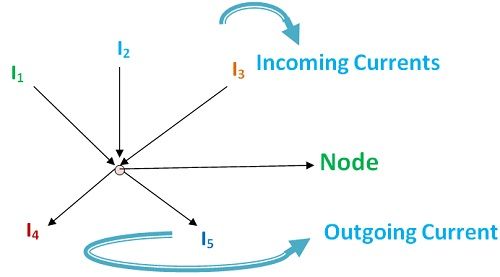 How KCL is applied in Electronics Circuits?

Terminologies involved with Kirchhoff’s Circuit law: Several terms such as node or junction, loop, mesh, path are used while using KCL and KVL. Let’s put a light on these terms.
a. Node or junction: It is represented in the circuit by a single dot. It is the point in a circuit where different current paths meet. All the current components meet at a particular node or junction.
b. Branch: It is that component of an electronic circuit which consists of resistors, capacitors, inductors. And these are connected between two nodes. In short, we can say two nodes when joined; it forms a branch.
c. Loop: Loop is the closed path in a circuit in which electronic device such as resistor, capacitor is traversed only once.
d. Mesh: A mesh is a loop which has no loops or components inside it.

According to KVL, the summation of potential difference around the closed network is always zero. The fundamental principle behind KVL is conservation of energy, or more precisely it deals with conservation of electric power. 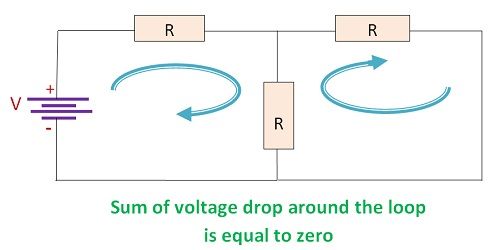 1. It is used for DC Circuit analysis.
2. It can be applied to any DC circuit and low-frequency AC circuits regardless of its composition and architecture.
3. It can be used for AC Circuits at frequencies. In such circuits, the wavelengths of electromagnetic radiations are very large as compared to the size of the circuit.

1. Kirchhoff’s Circuit law is based on lumped element model. Thus, if any electronic circuit does not follow lumped element model, then Kirchhoff’s law cannot be applied to them.
2. This law is not applicable to high-frequency AC Circuits. This is because this law is dependent on the principle that current flows only in conductors. Moreover, it enters at one ends and leaves from another end. But this is not so in the case of the high-frequency circuit because of Parasitic Capacitance.

How KVL is applied in Electronic Circuits?

If we start traversing from a point in a loop and summing up potential differences across various electronic components in a circuit, the summation will be equivalent to zero.