Here, the word differential is used as the output value we get is the difference value of voltages produced at the two secondary windings. Displacement provided is directly proportional to the output voltage generated.

The transformer has a single primary winding P and two secondary windings namely S1 and S2. 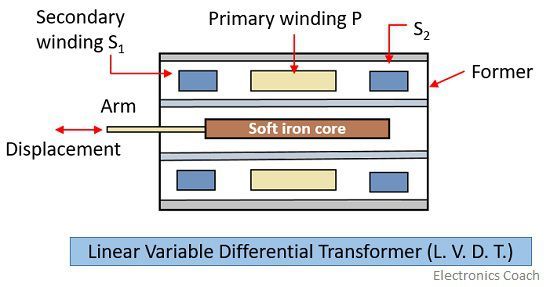 The former consist of a movable soft iron core and usually it is made of high permeability nickel-iron so as to get low harmonics, high sensitivity and low value of null voltage. 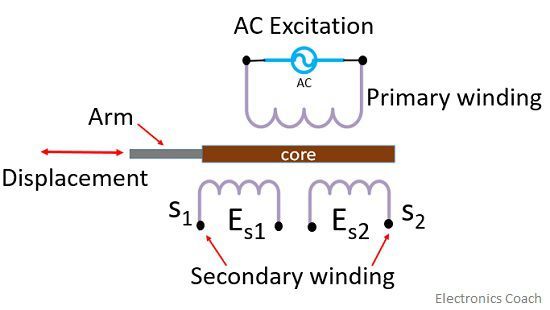 An ac source is provided at the primary winding of the transformer. The frequency range of the source lies between 50 Hz to 20 KHz. 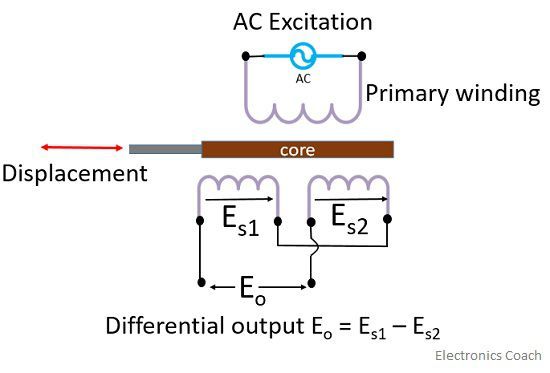 The corresponding output voltage is then generated at the output namely ES1 and ES2 and to get a combined output the two windings are connected in series opposition by which we get the difference of the two output voltages.

The overall assembly of LVDT is placed inside a housing of stainless steel material and the electrostatic and electromagnetic shielding is provided by the end lids.

To reduce the losses due to eddy currents the displacement is measured longitudinally. 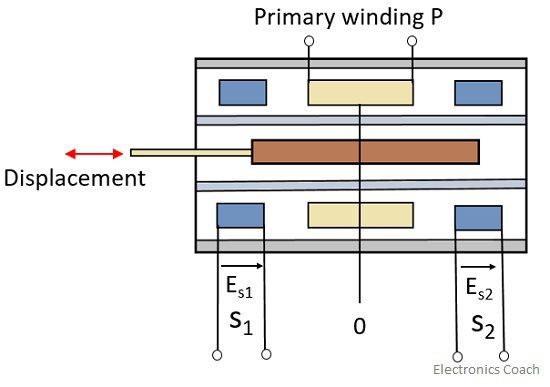 The O position on the above diagram indicates the NULL position.

So, at the null position, the resultant output voltage will be 0.

Further cases arise when the core is moved to either the left or right of the null position.

Position A in the diagram shows the motion of core towards the left direction. 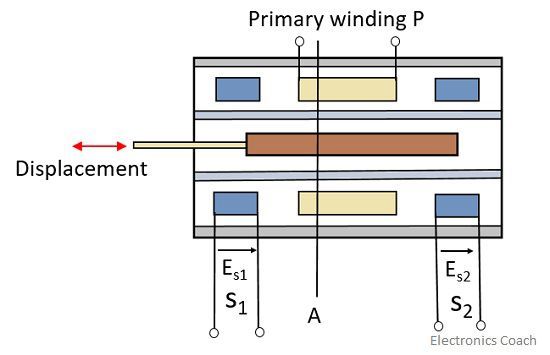 The flux linking in S1 becomes higher as compared to S2 so, the output voltage ES1 will become higher in comparison with ES2.

In this condition, the output voltage will be in phase with that of primary voltage. 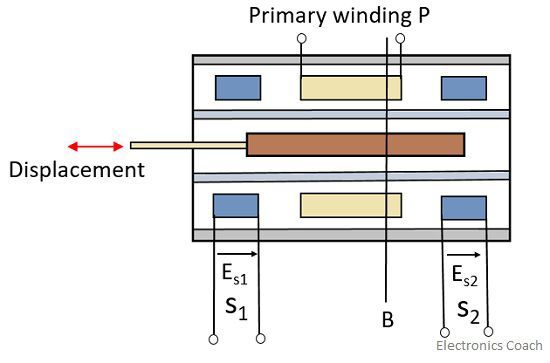 The flux linking in S2 becomes more than S1. Output voltage ES2 will become more as compared to  Es1.

Resultantly voltage at the output is given as, Eo = Es2 – Es1

That will be 180﮲ out of phase with the voltage of primary winding.

So from the above results, we can say that the voltage change is directly proportional to the amount of motion of the core.

By noticing the change in the output voltage, we can directly determine the direction of motion of the core.

The differential output voltage provides an estimate of the physical position of the core.

The displacement of the core is simply measured by the amount of voltage at the output as output is the linear function of core displacement from the NULL position.

Now, let’s have a look at the curve between the output voltage and displacement by which we can have a clearer view of the described process. 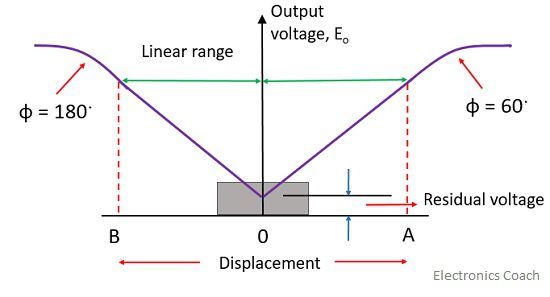 The curve is practically linear over a limited range of displacement from the NULL position to about 5mm but beyond this range, the curve starts to deviate from a straight line.

The output voltage ideally should be 0 but actually, there exists a small voltage due to the presence of harmonics in input supply or it can be due to the use of the iron core.

This voltage is generally less than 1% of the maximum output voltage generated.

This residual voltage can also be caused by temperature effect and stray magnetic fields.

It acts as a secondary transducer so can be used to measure force, weight and pressure etc. LVDT is used in all such applications where displacements have to be measured.