Definition: Transducer is a device that holds the ability to change a form of energy into another. Transducers are of various types such as electrical transducers, mechanical transducer, thermal, optical, acoustic etc.

Transducers are often termed as the heart of electronics instrumentation.

This is because in instrumentation we need to measure the quantities whether it is electrical, non-electrical physical etc. But it is not so easy to measure the magnitude of physical quantity. Let’s take an example of mercury thermometer if you want to measure the body temperature, is it possible to measure it directly??

Therefore, in instrumentation when we need to measure a physical quantity we need a transducer.

Requirements for a Transducer

There are some requirements for transducers to work efficiently; these are as follows: 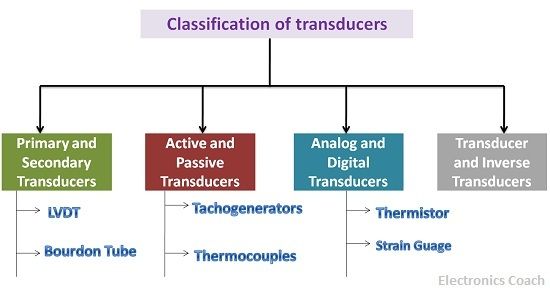 According to the sensing manner of the transducer, it can be classified into two categories, and they are as follows:-

On the basis of the process of energy conversion, the transducers can be classified again into two categories.

On the basis of the nature of the output signal generated by the transducers, it can be classified into two types.

Factors essential for deciding suitability of the transducers

There are certain factors which should be kept in mind during the selection of the transducers. These points are

Thus, transducers are the crucial devices in electronics instrumentation. With the help of it we can convert one form of energy into the form which can b easily measured through electronics devices.