Definition: Strain gauge is a device which is when subjected to some force results change in resistance of the material. The change in resistance is measured in terms of either load or displacement. It basically measures strain on the application of stress. Strain gauge directly is used for the measurement of load and indirectly it is used for the measurement of displacement.

The strain gauge was invented in 1938, by Edward E Simmons and Arthur C Ruge.

Strain gauges are employed as secondary transducers in many detectors and transducers. Such as load cells, torque meters, temperature sensors, accelerometer etc.

The resistance of the wire will change if the wire is stretched or compressed. This is due to dimensional change and the property of material called the piezo-resistive effect. 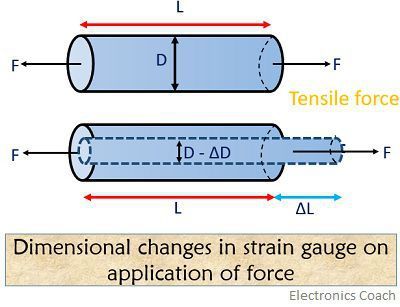 Piezo-resistive effect states that change in dimensions of the conductor resultantly changes its resistance. Resistance strain gauges are also known as piezo-resistive gauges.

The resistance is given by

ρ = resistivity of the material,

A = cross-sectional area of material

On differentiating resistance equation, we will have

Axial strain is given as-

The transverse strain is given as-

The volume of wire is

Substituting the value of L dA in above equation,

Dividing the above equation by

Resultantly we will have,

Gauge factor is given by,

: 1 = resistance change due to change in length

2ν = resistance change due to change in the area

= resistance change due to piezo-resistive effect

When strain is neglected,

The above equation is valid only when the piezo-resistive effect is almost negligible.

The value of Poisson’s ratio for all metals is between 0 to 0.5, that gives a gauge factor of value approximately 2.

The strain gauge is basically divided into following categories-

The wire can be made of alloys such as copper-nickel, chrome nickel, nickel-iron having a diameter of about 0.003 mm. The gauge factor for this category of the strain gauge is about 2 to 4 and sustain a force of 2mN.

These are almost exclusively used in transducer applications where preloaded resistance wires are connected in a Wheatstone bridge configuration.

The grid of fine resistance wire is cemented to carrier. It can be a thin sheet of paper, Bakelite or a sheet of Teflon. 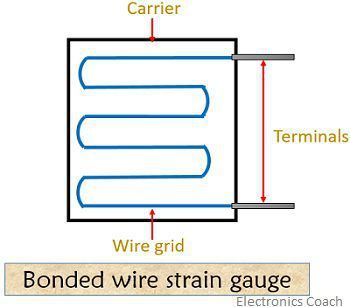 To prevent the wire from any mechanical damage, it is covered on top with a thin sheet of material. The spreading of wire allows us to have a uniform distribution of stress over the grid.

The carrier is bonded with an adhesive material. Due to this, a good transfer of strain from carrier to a grid of wires is achieved.

Typically, the resistance of strain gauges is 120Ω, 350Ω, 1000Ω. But a high resistance value results in lower sensitivity. Thus to have higher sensitivity, higher bridge voltages have to be used.

This category is just an extension of previously defined, bonded metal wire gauge. These metal foil strain gauge uses similar materials to wire strain gauges. These are widely used in stress analysis applications and for many transducers. 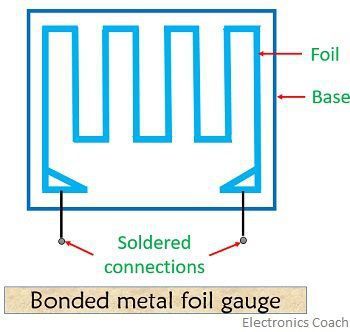 Foil type gauges have higher operating temperature range. This is so because it has much higher heat dissipation capacity as compared to wire wound strain gauges. This is due to their greater surface area for the same volume.

The action of a semiconductor strain gauge depends on piezo-resistive effect i.e., the change in resistance due to resistivity.

These are mainly used in conditions where high gauge factor and small envelope are required. The resistance of semiconductor changes with the change in applied strain.

As the name indicates the semiconductor strain gauges use semi-conducting materials. Such as silicon and germanium for their construction.

Typical strain gauge material has a crystal material that is strain sensitive along with leads sandwiched in a protective matrix.

This category of the strain gauge is basically used in transducers. Here, the diffusion process is employed which is used in IC manufacturing. In pressure transducers, these are used as sensing elements. 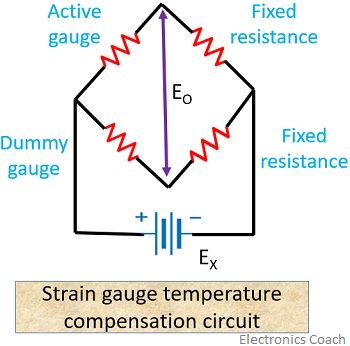 The change in resistance is always measured by Wheatstone bridge. There are basically two types of measurement- one is using balanced bridge other is using an unbalanced bridge. 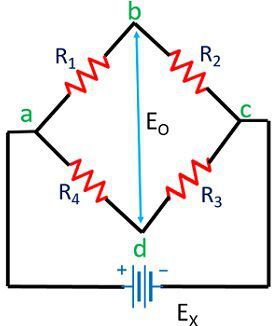 For the bridge to be balanced, points ‘b’ and ‘d’ must be at the same potential.

Diving the above 2 equations

In case of no current in the detector

This simply means that either R4 or R2 can be used to compensate the temperature.

Applications of the strain gauge