Definition: PNP transistor is three terminal current controlled device which consists of three terminals formed by sandwiching a layer of N-type material between the two P-type semiconductors. It acts as a current sink because all the emitter current sinks into the base terminal.

The majority charge carriers involved in the conduction process of PNP transistor are holes. Thus, the current which generates at the collector is the consequence of the movement of holes. 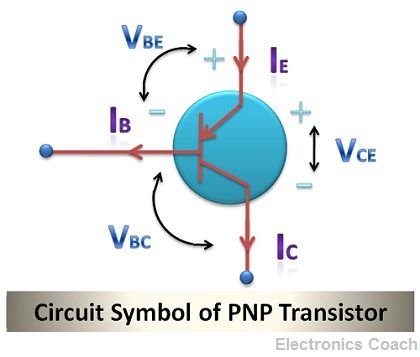 You must be thinking how the flow of holes results in the flow of current in the circuit. You will understand this concept in the working which I will be discussing later in this article. Before that, let’s discuss its construction.

The PNP transistor is formed three layer of semiconductor, one is N-type and other two are P-type. The structure thus formed will be a PNP transistor. It will have three terminal, the first P-type semiconductor is called emitter and the other P-type material is termed as the collector.

The semiconductor material which is between both this semiconductor is called base terminal. The PNP transistor is biased in such a way that the base-emitter junction is forward biased and collector based junction is reversed biased. 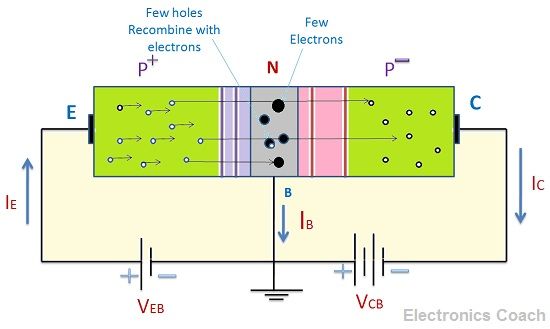 Concept of Effective base width

Effective of Doping and Size of Enmitter

We have already discussed in our previous article that the emitter is heavily doped than base and collector and area of the emitter is also more than the base but less than the collector. The base is lightly doped so it has fewer electrons.

The majority of electrons are remaining that has not combined with electrons of base terminal. These electrons will flow towards collector. They will further move towards the end of collector region because they are attracted by negative terminal of the battery through which collector is connected.

In this due to movement of holes, electric current flows in the circuit. Some of the holes also away from base constituting the base current in the circuit.

It can be used as a switch. The circuit is formed by connecting a voltage divider circuit with PNP transistor. 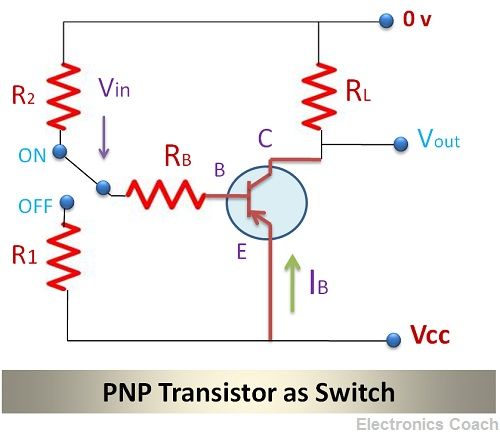 You can understand more clearly with the help of circuit digram of transistor used as a switch.