Definition: The word Transistor is formed from two words, one is “Transfer” and other is “Varistor”. This implies a device which transfers resistance from one channel of the circuit to other is called transistor.  It is a three terminal current controlled device which can either be operated as switch or amplifier by providing small signal voltage. It is one of the significant types of active devices.

Significance and History of Transistor

You must be thinking what is the need of transistor???

Let me explain this with the subvention of history. In the beginning of 20th century when the vacuum triode was invented, it was considered as the significant development in the field of electronics. This is because devices such as computers were entirely based on them.

But the problem started with their size which can capture the entire room. Now you can imagine what will happen if the entire room consists of a single processing system. Obviously, to work with it is a cumbersome process.

Fortunately, we have compact size processing system in the contemporary world. But this all has become possible with the invention of the transistor. In the year 1947, John Bardeen along with William Shockley & Brattain invented the transistor. The consequences are quite evident. Now, all the computing devices are available in small size which we can easily carry with us anywhere.

Let’s discuss constructional features of the transistor, how this 3 terminal device is formed. A diode is two terminal device, thus, if we merge the two diodes provided that one terminal is common, the resulting device will comprise of three terminals.

The three terminals have specific names that are as follows:-

We will discuss functions of these three terminals in the working of the transistor.

A transistor is a semiconductor device, so the semiconductor material used in its construction can be either germanium or silicon, but silicon is preferred over germanium because it possesses smaller cutoff current. 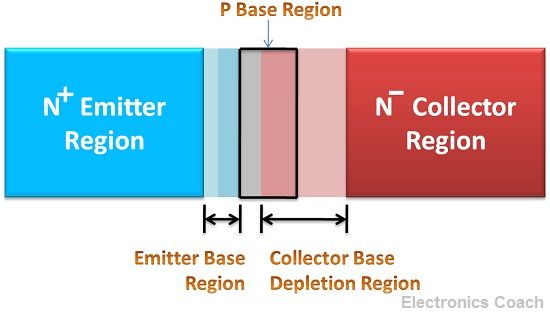 Let’s consider an NPN transistor which is unbiased. Unbiased means it is not provided with any external voltage source. In this condition, the majority charge carriers in emitter region will move towards the base region.

Due to moderate doping and small size of the base terminal, only 5-10% of the charge carriers entering base will recombine. Please note that we have considered NPN transistor so majority charge carriers in emitter will be electrons.

Thus, only a few electrons will recombine at the base and the remaining will start moving towards collector. Thus, 90-95% of the electrons emitted by an emitter will get recombined with holes in collector region. This movement of electron and holes in the circuit result in the generation of current.

Mainly, the transistors work in three regions that are as follows:

Everything comes with pros and cons. You must have heard this. For every advantage, a device possesses it must possess certain drawbacks although the former outweighs the latter. Transistors too have certain disadvantages.