Diode and Transistor are considered as the backbone of electronic devices and Circuit. But the similarities between these crucial devices of electronics realm end here. The main difference between diode and transistor is that a diode is a two terminal device which allows current in one direction only from the anode to the cathode.

There are certain factors which differentiate these two devices such as depletion region, applications etc.  We will discuss all these factors with the help of comparison chart. 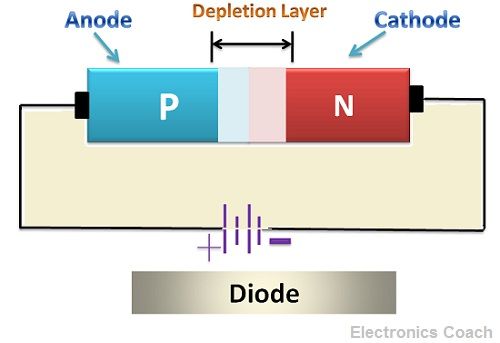 Let’s discuss unbiased mode first. In an unbiased mode, the electrons from N-region and holes from P-region will move towards the junction due to the concentration gradient. A stage will reach when no more charge carriers will diffuse across the junction. This stage is called saturation stage.

After this, the electrons and holes which have reached the junction will recombine. Due to this the movement of further majority carriers will get restricted. The region so formed is called depletion layer. It will create an internal electric field.

Now moving towards biased mode, when biasing is applied, i.e. connection of P-type with the positive terminal and N-type with negative terminal. The forward current will starts flowing from anode to cathode. The width of the depletion region decreases with increased forward biased.

Similarly, the width of the depletion layer increases with the reversed biased condition in reverse biased mode. The current which flows in the diode is because of the minority charge carriers. This is called reverse saturation current because it gets saturated after a particular reverse voltage. Then it does not increase further with the increase in reverse voltage.

The reverse current increases only with the increase in temperature. 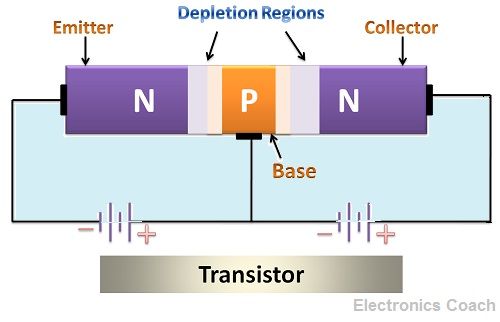 The emitter and base are connected to the battery in such a manner that they work in forward biased mode while the collector and base are connected to battery in such a way that it becomes reversed biased. Therefore, the majority charge carriers will flow from emitter to base and then base to collector. The larger the size of the collector, the more will be the charge carriers it collects and the heat dissipation will also take place easily.

Key Differences Between Diode and Transistor

The diode is a two-terminal unidirectional device while the transistor is a three terminal device which passes current from high resistance region to low resistance region via the base. A diode is used in various applications of electronics such as in rectifier, clipper, clamper, voltage multiplier, switches etc. A diode act as a switch. It is ON when it is forward biased, and it is OFF when it is reversed biased.

Transistor can act as a switch and also as an amplifier. The application creates the major difference between diode and transistor. Diodes are of various types such as zener diode, PIN diode, photodiode, light emitting diode etc. while transistors are mainly of two types bipolar transistor and field effect transistor.