Definition: A thermocouple is a device that is used to measure temperature. These are active transducers as they work on the principle of energy conversion. It does not require any source of power for their operation.

It is used in temperature measurement of up to 1400⁰C.

When metals of dissimilar materials are joined at both the ends. Each having different junction temperature than the other, a potential difference induces in the circuit. Thus current is created in the circuit.

The same is the case with Thermocouples also, which we will discuss in the upcoming section.

As we have already discussed that it consists of metal wires of two different materials. The choice of the material is based on the range of temperature to be measured, the exposure environment of the material, its stability, mechanical strength etc. 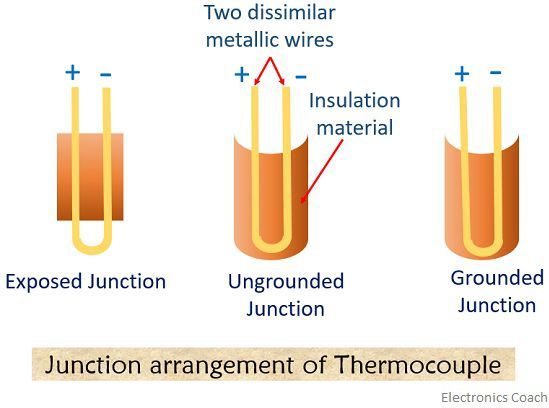 Bare conductors are not used by thermocouples until and unless the atmospheric condition permits their use. The condition can be the one when the temperature to be measured is low and the atmosphere is non-corrosive. By reducing the mass of measuring junction the sensitivity of thermocouples can be reduced.

The two junctions are created using 2 dissimilar metal wires as we have discussed earlier. 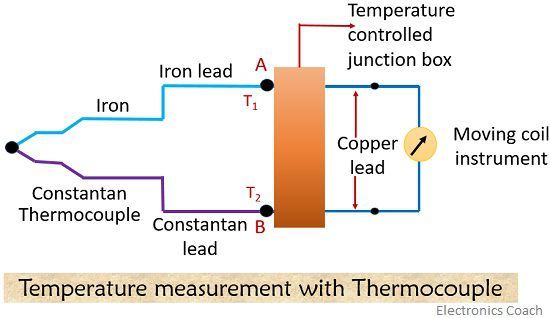 When the temperature of the two junctions becomes equal, it will generate equal and opposite emf that cancels out each other thus causing no current to flow through the circuit.

The emf induced in a thermocouple is given by-

:  ∆θ = difference of temperature in between hot junction and the reference junction.

Usually, the value of ‘a’ is very large in comparison to ‘b’
Therefore emf is given by-

The emf generated in the device results from the temperature difference between measuring junction and the reference junction. The output can be measured by the following methods-

Millivoltmeter– Connecting a Millivoltmeter at the reference junction to measure its temperature is the simplest method. The deflection is proportional to the current flowing through the circuit.

Potentiometer– The commonly known method for temperature measurement is with the help of potentiometers. At balanced condition, no current is drawn from the circuit whose emf is being measured.

Amplifiers with output devices– Cheap and compact dc amplifier are made by the use of a transistor and integrated circuit. The output of the thermocouple is amplified by the amplifier and is feed to the indicating device. But in this case, an auxiliary source of power is required.

These are classified as

Base metal Thermocouples– In this category of Thermocouple, the base metal is made from common and inexpensive materials such as Nickel, Iron, Copper.

Following types fall under this category-

Noble Metal Thermocouple– It has the ability to withstand high temperature and is made up of expensive materials.

Following types fall under this category-

Non-thermocouple materials can also be used as terminal blocks or splices until there is no temperature gradient across these devices.