Definition: A digital modulation technique in which the amplitude of the carrier wave is altered according to the modulating signal (bitstream) is known as Amplitude Shift Keying (ASK). It is the easiest and straightforward digital modulation scheme.

ASK is sometimes known as On-Off keying because the carrier wave swings between 0 and 1 according to the low and high level of input signal respectively.

In ASK, frequency and phase of the carrier wave is kept constant and only the amplitude is varied according to the digitized modulating signal. It is also referred as Binary Amplitude Shift Keying (BASK) as its usual operation is associated with only two levels.

However, one can have multiple levels of signal elements also.

In the figure given below, we can see waveforms of amplitude shift keying. 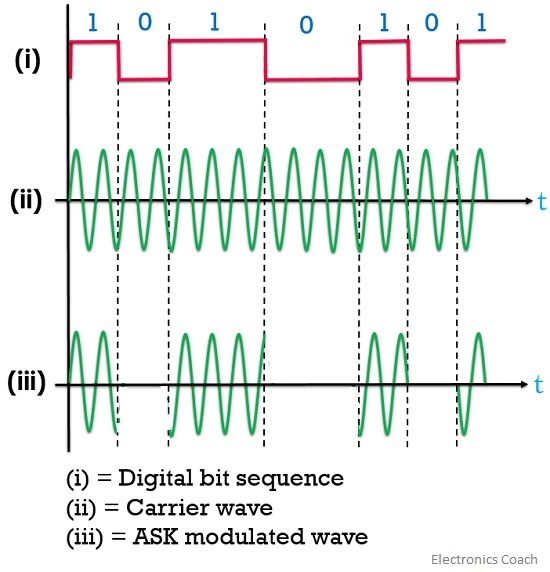 Here, (i) figure represents a message signal represented in the forms of the bitstream, (ii) shows the carrier wave; whose amplitude is to be varied according to the digital message signal.

The last figure (iii) shows the resultant ASK waveform which is amplitude modulated. It is clear from the figure that the signal is present only in case of the high-level digital stream. No signal waveform is achieved when the bit shows a low level, showing on and off behaviour.

The figure below shows the block diagram representing the process of generation of an amplitude shift keying waveform. 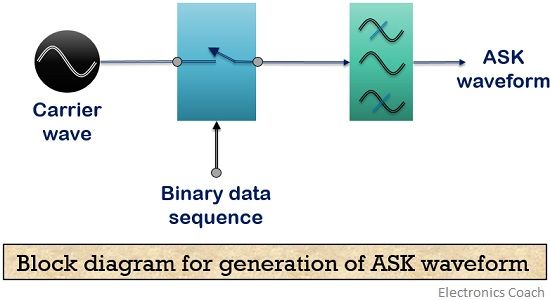 It consists of a signal generator that produces a high-frequency sinusoidal waveform, a message signal in digitized form and a bandpass filter.

The switch provided here gets open and closed according to the bits of the message signal. When the digital bit is of level high i.e., 1 then the switch gets closed. Thus, allows the carrier wave to get transmitted.

As against, in case of low-level bit i.e., 0 the switch gets open and restrict the carrier wave.

This is the reason why the signal appears at the output in case of a high level. After this, pulse reshaping is done by the band limiting filter according to the amplitude and phase characteristics of the filter.

Detection or demodulation is the process of recovering original message signal from the modulated waveform.

The figure below shows the process of coherent detection.

The demodulation circuitry consists of a product modulator along with an integrator and a decision-making device.

Here, the input to the product modulator is modulated waveform along with the sinusoidal carrier. The combination of the two is then fed to the integrator that operates successively according to the bit interval. After which it also executes low pass filtration of the signal.

The figure below shows the block diagram of a non-coherent ASK detection technique composed of a bandpass filter and envelope detector along with a decision device.

As it does not require a synchronized carrier thus the method makes use of the rectifier circuit for the rectification of the signal. After which the signal is fed to the low pass filter.

The output of which is then provided to a decision device that compares the signal value with the preset threshold value in a similar manner as done in the coherent detection. Thus generates the equivalent output, which is the original digital bit stream.

Note: As ASK is an amplitude modulation scheme, the modulated wave and the message signal has the same bandwidth. Here, an abrupt change in the amplitude is noticed according to the respective change in data bit.

Thus, the scheme allows data transmission in case of low or medium data rate rather than the high data rate.

Thus we can conclude that by using ASK technique, digital data can be transmitted and by varying only the amplitude factor the carrier wave.