It is the most straightforward and efficient digital signal transmission scheme.

The figure below shows the binary frequency shift keying technique: 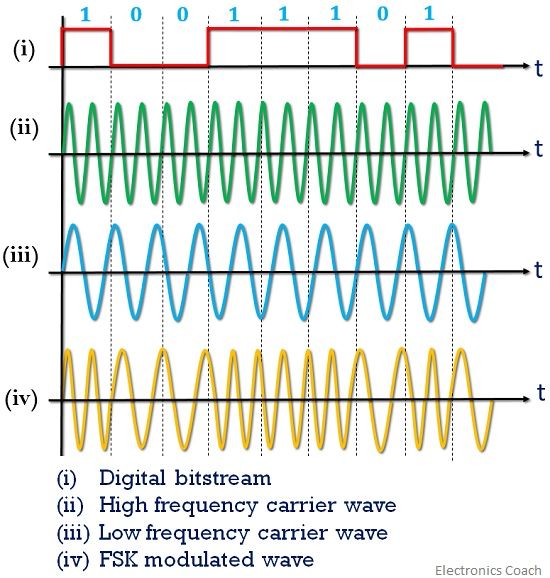 Here as we can see, that in the figure (i) the modulating signal in the form of the bit stream is present. Figure (ii) and (iii) shows the high and low-frequency waveform.

The (iii) figure shows the FSK modulated waveform, whose frequency shows variation according to the digital signal.

The figure below shows the generation of FSK modulated wave. 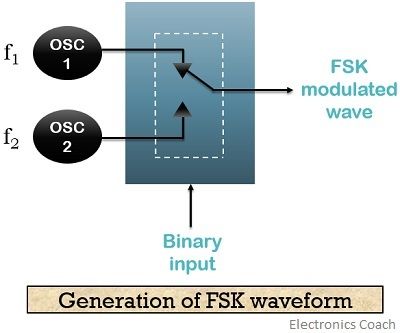 Here, as we can see that the system consists of 2 oscillators that generate high and low-frequency signal separately. A binary message signal is provided to the transmitter circuitry. The carrier wave from the two oscillators and binary modulating signal operates the switch.

In the case when the modulating signal bit is high i.e., 1, the switch gets closed forming a path for a high-frequency wave to get transmitted that is generated by oscillator 1.

Thus a high-frequency signal is achieved in case of bit 1 of the message signal.

Hence, it is clear that a low-frequency signal is achieved in case of a low data bit of the modulating signal.

However, in order to eliminate phase discontinuities of the signal at the output, an internal clock is provided to the oscillator. Thus, the high or low-frequency signal is selected according to the digital modulating signal.

Thus, an FSK modulated wave is transmitted and achieved at the output.

The figure below shows the block diagram for the coherent detection of BFSK signal. 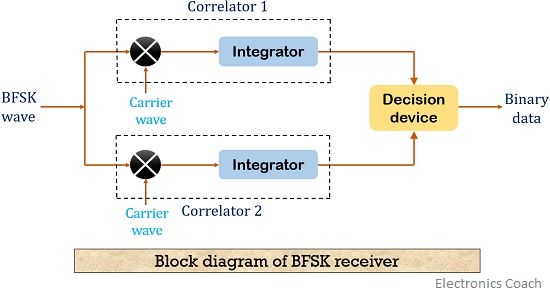 As we can see that it consists of 2 separate mixers followed by the integrators that form the two correlators in the circuit. The output of this correlator is then fed to the decision device. This decision device generates the binary signal which is the original modulating signal.

Here, a BPSK waveform is fed to the mixer along with the two separate carriers that are accurately synchronized with the carrier waves at the transmitting end. The output generated by the mixer is then fed to the integrator.

The output of the two separate integrators is then compared by the decision-making device. When the output of integrator 1 is more than that of the integrator 2 then the frequency of the carrier associated with correlator 1 generates the bit symbol. Assume, it to be a high-frequency carrier then a logic high is generated at the output.

Similarly, when the output of the integrator 2 exceeds integrator 1 then the carrier frequency associated with correlator 2 generates symbol in favour of that frequency. Let us assume conversely that it is a low-frequency wave then symbol 0 is achieved at the output.

It consists of two separate Bandpass filter that is tuned to two different frequencies. The output of this BPF is then fed to an envelope detector which generates two separate output according to the signal achieved from the BPF.

Thus the original bitstream is generated by the detector.

It is noteworthy in the case of frequency shift keying that only the variation in frequency is noticed, however, the phase and amplitude of the carrier do not show any variation.