Definition: A digital modulation technique that transmits data by varying the phase of the carrier wave in accordance with the digital modulating signal, is called Phase Shift Keying (PSK).

The easiest form of PSK is BPSK i.e., binary phase shift keying. However, PSK can be extended to 4 level and 8 level PSK that totally depends on the need of the system.

BPSK technique is the simplest among all the PSK techniques. In this, each signalling element is represented by a single data bit. Here, the carrier undergoes two phase reversal such as 0° and 180°. In phase shift keying the digital bit sequence is first converted to NRZ bipolar signal which directly modulates the carrier wave.

Let us consider the carrier wave is given as

The peak of the carrier wave is represented as A when the load resistance is assumed to be 1 ohm as standard, the power dissipated is given as,

A change in phase by 180° is noticed with the corresponding change in the bit sequence.

Assume the carrier for symbol 1 is given as

Similarly, in the case of symbol 0, we have,

Hence, BPSK signal can be written as,

The figure below shows the block diagram for the generation of a BPSK signal.

As we can see here that the system consists of NRZ encoder along with product modulator and carrier generator.

Let us have a look at the figure below that shows BPSK generated waveform with the binary bit sequence and carrier wave. 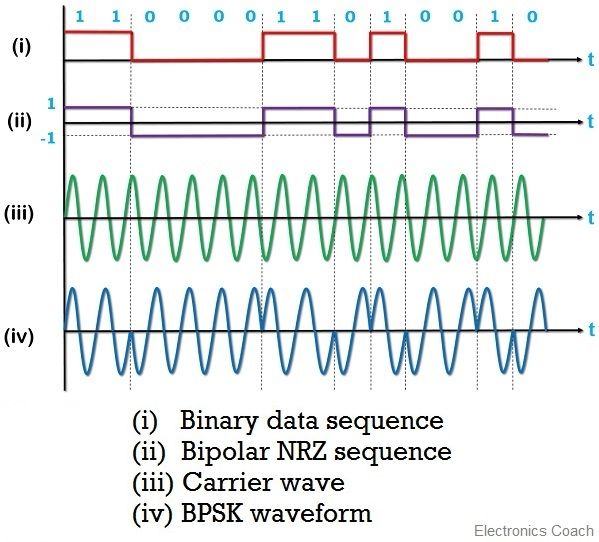 Here, (i) represents the binary bit sequence, the next represents the bipolar NRZ sequence m(t) that is used to modulate the carrier wave represented in (iii). The resultant BPSK signal is then achieved.

The block diagram for the coherent detection of BPSK signal is shown below:

Let us consider, the signal at the input of the receiver is

The phase shift ɸ is based on the time delay in between transmitter and receiver.

Here, only the carrier of the signal is taken into consideration thus the amplitude is neglected.

Expanding the carrier as the above mathematical identity,

This signal is then fed to the BPF as we can see in the diagram above. This BPF has a centre frequency of 2fc, eliminates the dc level hence, generates output as

This carrier is then multiplied with the input signal,

thereby generating the output as,

Further, processing continues when S2 gets open and S1 gets closed for some time, resetting the voltage of the integrator to 0. Then the next bit is integrated by the integrator and the cycle repeats. The decision device then generates the equivalent binary data, the actual message signal.