Definition: An astable multivibrator is a type of multivibrator that does not require a triggering pulse thus, sometimes known as a free-running multivibrator. It necessarily provides square wave as its output.

Astable multivibrator is called so because both the states present here are unstable i.e., quasi-stable. This means output swings between 0 and 1 and neither 0 nor 1 is the stable state.

Here, the successive transition is made from one quasi-state to other after some pre-decided time interval.

Circuit and Operation of Astable multivibrator

The figure below shows circuit of an astable multivibrator: 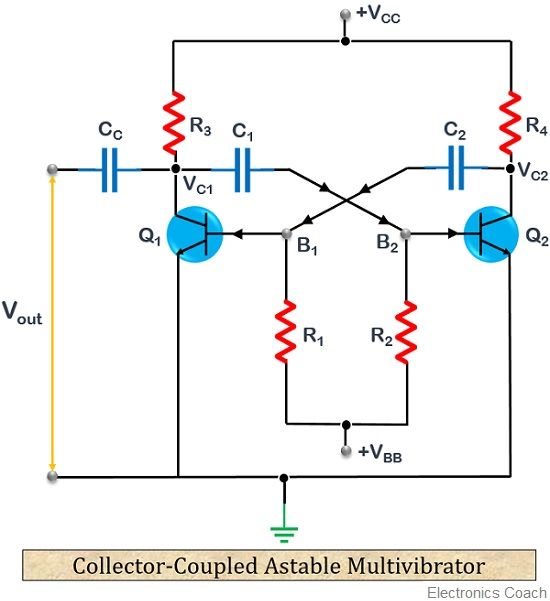 But, due to variation in operating characteristics, one conducts more than the other.

Let us assume that Q1 conducts more than Q2, so we consider the conduction of Q2 as almost negligible. Hence, considering only Q1 is conducting.

Due to applied low potential, transistor Q2 reaches the cut-off region, thereby causing an open circuit. This causes, a high potential at the collector of Q2 represented by Vc2.

This increased potential as shown in the figure above is supplied at the base of transistor Q1. Thus, causing it to get short circuit by reaching a saturation region.

Hence, the assumption taken at the beginning is satisfied.

After some duration, Q1 completely reaches the saturation region and Q2 at the cut-off region. As we are taking output at the collector of Q1, thus at saturation region Vc is minimum. So, the first unstable state achieved will be 0.

Now, moving further, VBB comes into action, due to which a current start to flow from VBB to Q2. As Q2 is in the cut-off region and behaving as an open circuit. So, the current charges the capacitor C1 connected in the circuit. Thus, producing a voltage across C1.

This high voltage is fed to the base of Q2. Hence causing it to move saturation from the cut-off region by starting conduction. This ultimately reduces the collector voltage at Q2, thereby providing minimum voltage.

This low voltage is then fed to the base of Q1, hence now it moves to the cut-off region. Ultimately, the collector potential at Q1 is increased rapidly.

Hence, the next unstable state achieved is a high voltage i.e., 1.

In this way, the full operating cycle repeats in order to provide a complete square wave at the output. The duration of each of the unstable state is dependent on the time constant. Let us now understand how a complementary transistor astable multivibrator works.

As here the power is taken for some short period of time from the supply at the time when the transistor is on. Thus, it consumes very less power as compared to collector coupled astable multivibrator. 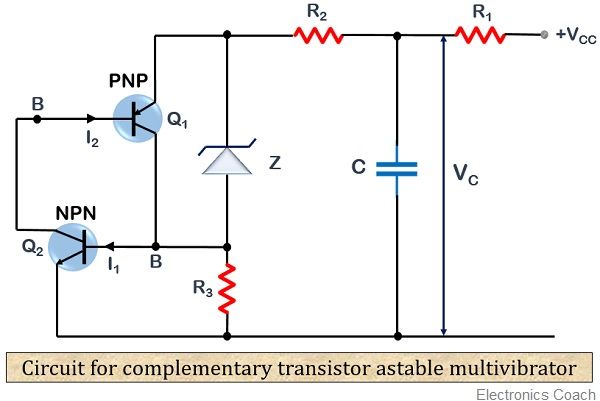 As we can see, Q1 is the PNP transistor and Q2 is the NPN transistor.

When power is applied at the circuit, the capacitor in the circuit starts charging up to the applied potential. When the voltage across the capacitor reaches the summation of zener voltage and the cut-in voltage of the transistor, the emitter-base junction of NPN transistor Q2 gets forward biased.

As Q2 starts conduction, now the collector current starts to flow through the emitter-base junction of PNP transistor Q1.

Hence, when the base of Q2 is increased, both the transistor comes to saturation region, causing it to come to on state. Ultimately discharging the capacitor.

The process repeats in order to provide continuous output in case of the astable multivibrator.

These are widely used in radio equipment, in timing circuits and the systems that require square wave as output.