Circuit and Operation of Monostable multivibrator

The figure below shows the circuit diagram of a collector coupled monostable multivibrator: 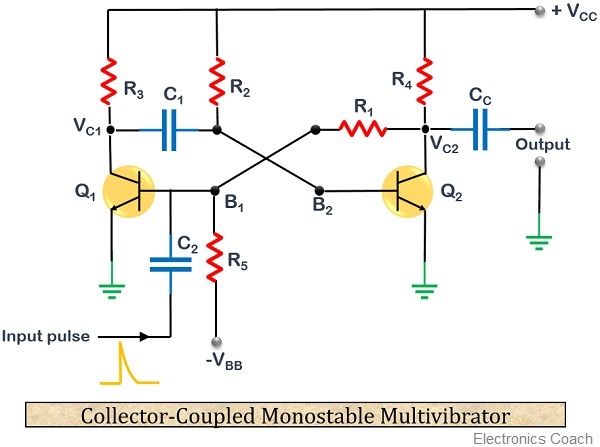 As we can see the circuit is composed of two transistors Q1 and Q2. The circuit is designed in order to have the operation which enables transistor Q2 in conducting state and Q1 in cut off state.

This high potential now charges the capacitor C1 which is placed between the collector of Q1 and base of Q2. So, this potential is then fed to the base of transistor Q2.

As we are taking the output from the collector of transistor Q2 through capacitor CC. Thus, 0 is achieved at the stable state of the circuit.

Now, a triggering pulse of short duration but higher magnitude is applied at the base of Q1 through a capacitor C2. This high magnitude pulse forward biases the transistor and Q1 starts conduction. Due to this now Q1 shifts from the cut-off region to saturation region.

As Q1 reaches saturation, a low potential is achieved at the collector of transistor Q1. Since the capacitor, C1 was charged initially and its charges cannot diminish easily. Thus, the charge on the capacitor is maintained.

The low collector potential of Q1 is now fed to the base of transistor Q2. This low voltage reverse biases the diode and drives Q2 to the cut-off region. Thereby, providing a high voltage at the collector of transistor Q2 which is taken at the output through CC.

It is noteworthy here that this time the achieved state will be quasi-stable. This means that the output will remain high only for the predetermined time duration determined by the time constant of the circuit. After this duration, the output will come back to its stable state.

The high potential at the collector of Q2 is again fed to Q1 and drives it to saturation region. Thus, the process repeats and again a stable state is achieved.

The circuit will now again need a triggering pulse in order to have transition from a stable state to quasi-stable state.

The figure below shows the circuit diagram of an emitter coupled monostable multivibrator: 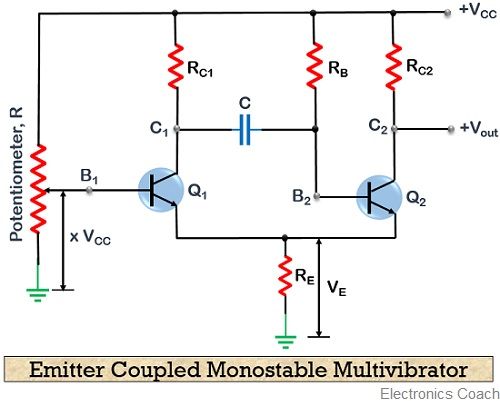 Here, also we have formed the circuit that operates with Q2 as conducting and Q1 in a non-conducting state.

This resultantly causes more current to flow through the transistor. Thus, low potential at the collector of Q1 drives Q2 to cut-off. By passing time, the capacitor is charged by the current flowing through the circuit.

Due to the stored charge at the capacitor, a high voltage is provided at the base of Q2. This again causes Q2 to start conduction.

As Q2 conducts, the voltage drop across RE also rises, resultantly causing Q1 reverse bias. The process is further repeated in a similar way.

In the end, we achieve, Q1 in cut-off and Q2 in the saturation region. Thus the original stable state is achieved from quasi-stable.

This is how a monostable multivibrator works.