Definition: Asynchronous counters are those counters which do not operate on simultaneous clocking. In asynchronous counter, only the first flip-flop is externally clocked using clock pulse while the clock input for the successive flip-flops will be the output from a previous flip-flop.

This means that only a single clock pulse is not driving all the flip-flops in the arrangement of the counter.

Asynchronous counters are also known as ripple counters and are formed by the successive combination of trailing edge-triggered flip-flops. It is called so because the data ripples between the output of one flip-flop to the input of the next.

Before knowing about asynchronous counter one must know what are counters? So let us first understand the basic idea of counters.

Counters are one of the most useful parts of a digital system. A counter is a sequential circuit that holds the ability to count the number of clock pulses provided at its input.

The output of the counter shows a particular sequence of states. This is so because in the applied clock input the intervals of the pulses are known and fixed. Thus can be used to determine the time and hence the frequency of the occurrence.

An arrangement of a group of flip-flops in a predetermined manner forms a binary counter. The applied clock pulses are counted by the counter.

We know that a flip-flop has two possible states, therefore for n flip-flops there will be 2n number of states and permits counting from 0 to 2n – 1.

Counter are of two types – Asynchronous and Synchronous Counters.

Here in this section, we will discuss asynchronous counters.

Circuit and Operation of Asynchronous Counter

The figure given below shows the circuit diagram of a 3-bit asynchronous counter: 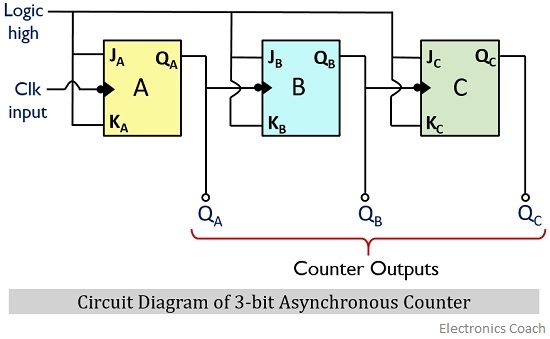 Here as we can clearly see that 3 negative edge-triggered flip-flops are sequentially connected where the output of one flip-flop is provided as the input to the next. The input clock pulse is applied at the least significant or the first most flip-flop in the arrangement.

Also, logic high signal i.e., 1 is provided at the J and K input terminals of the flip-flops. Therefore, the toggling will be achieved at the negative transition of the applied clock input.

Let us now have a look at the timing diagram of the 3-bit asynchronous counter: 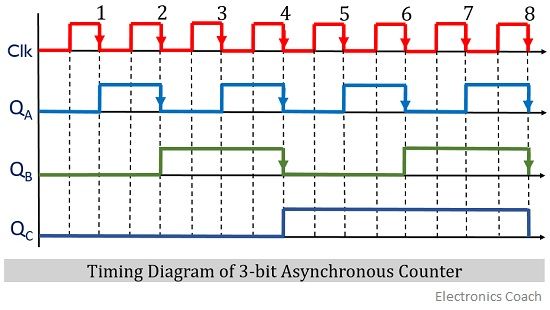 Therefore, the further toggling of the QB will depend on the falling edge of QA signal.

So, as we can see clearly in the timing diagram that QB undergoes toggling only at the falling edge of the QA signal. And the clock input signal is not affecting the output of flip-flop B.

Further for flip-flop C, the clock input will now be the output of flip-flop B i.e., QB. So, the output QC will be according to the transition of QB.

So, in this way, we can say that we are not simultaneously providing a clock input to all the flip-flops in asynchronous counters.

Now the question arises by this how the counter counts the number of states? 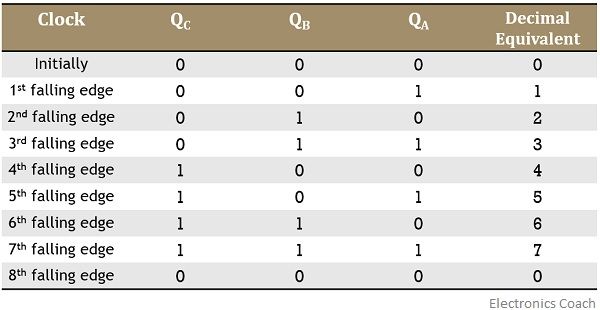 Thus, we can say an asynchronous counter counts the binary value according to the clock input applied at the least signal bit flip-flop of the arrangement.

A 3-bit counter is also known as mod 8 counter due to the presence of 8 states.

These are used in applications where low power consumption is required. And are also used in frequency divider circuits, ring and Johnson counters.